The remainder of canopy work, mostly laying up the fiberglass front fairing, is on hold until warmer weather. So for the last two weeks I’ve been working on laying out and installing everything that needs to be on the firewall before the engine mount is permanently reattached. 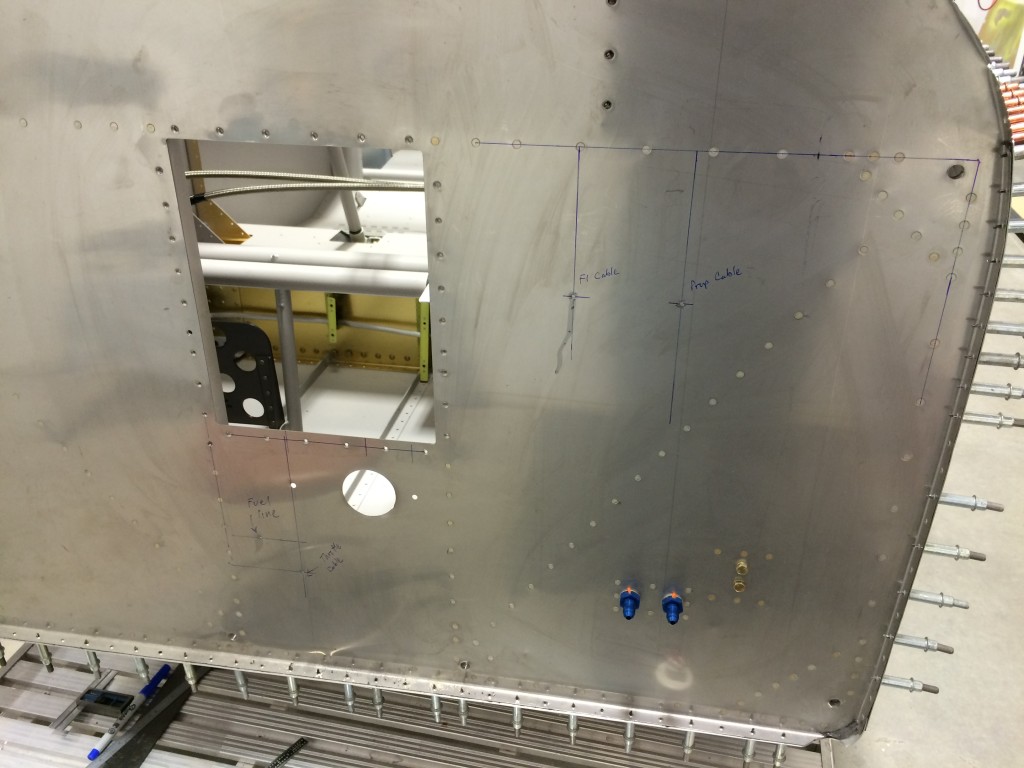 Throttle, mixture and prop cable penetrations laid out on firewall. 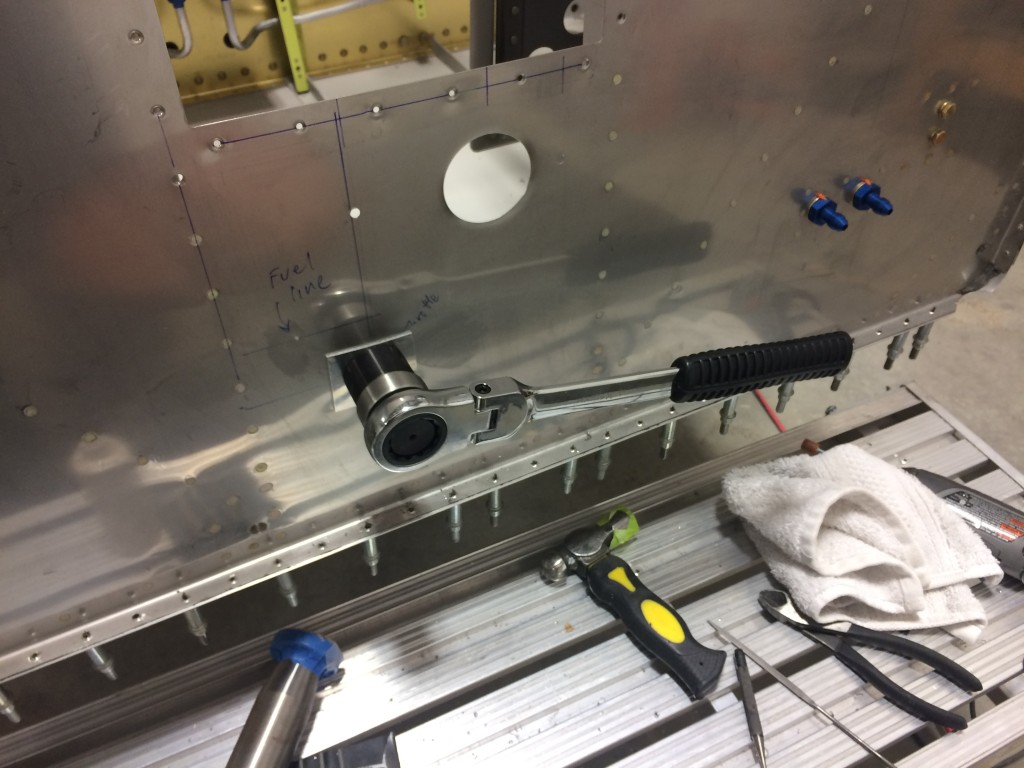 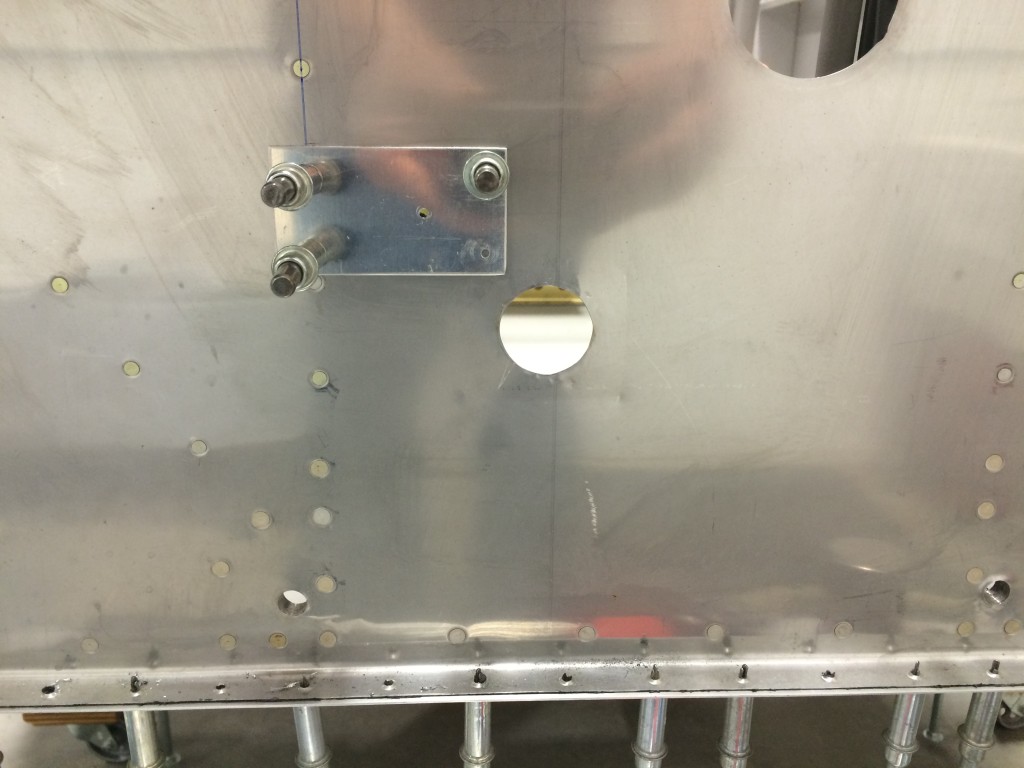 Not a super clean hole, but better than I could have done otherwise. 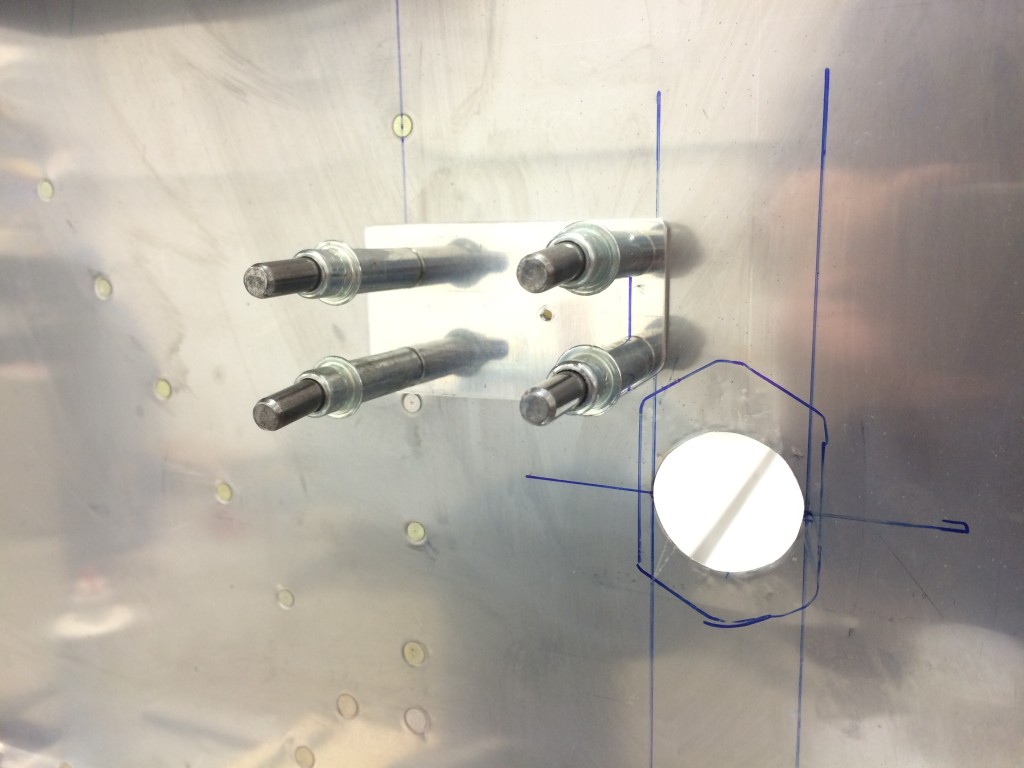 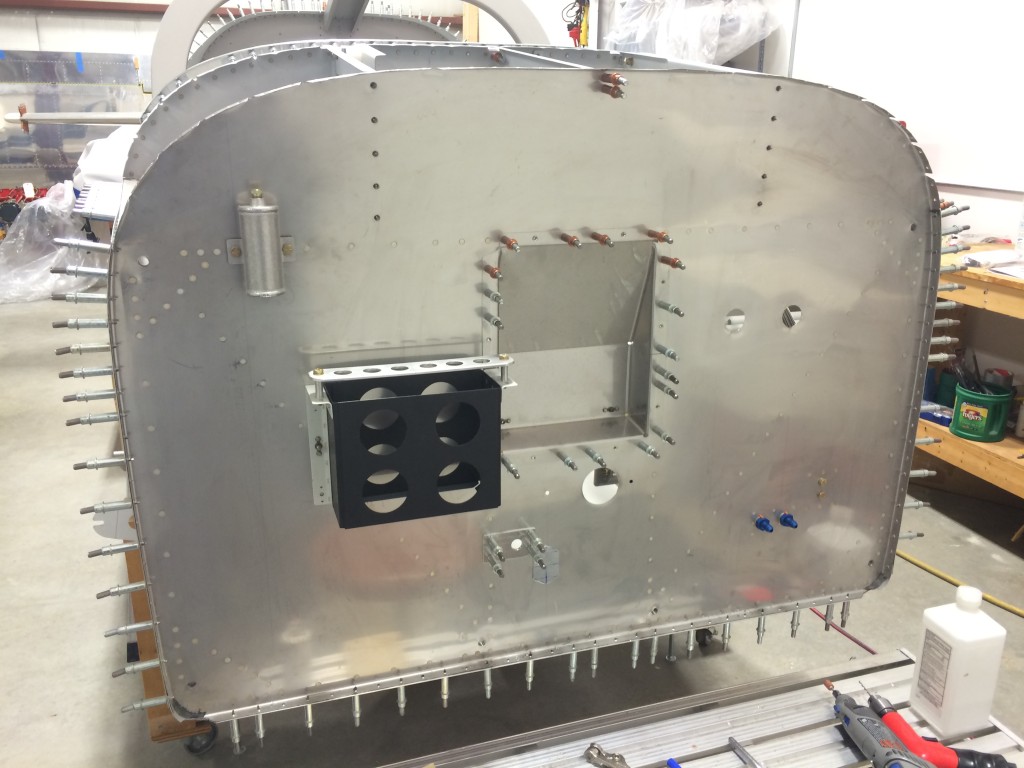 The oil filter cutout and battery box are in temporarily installed so I can begin laying out battery and starter contractor locations. 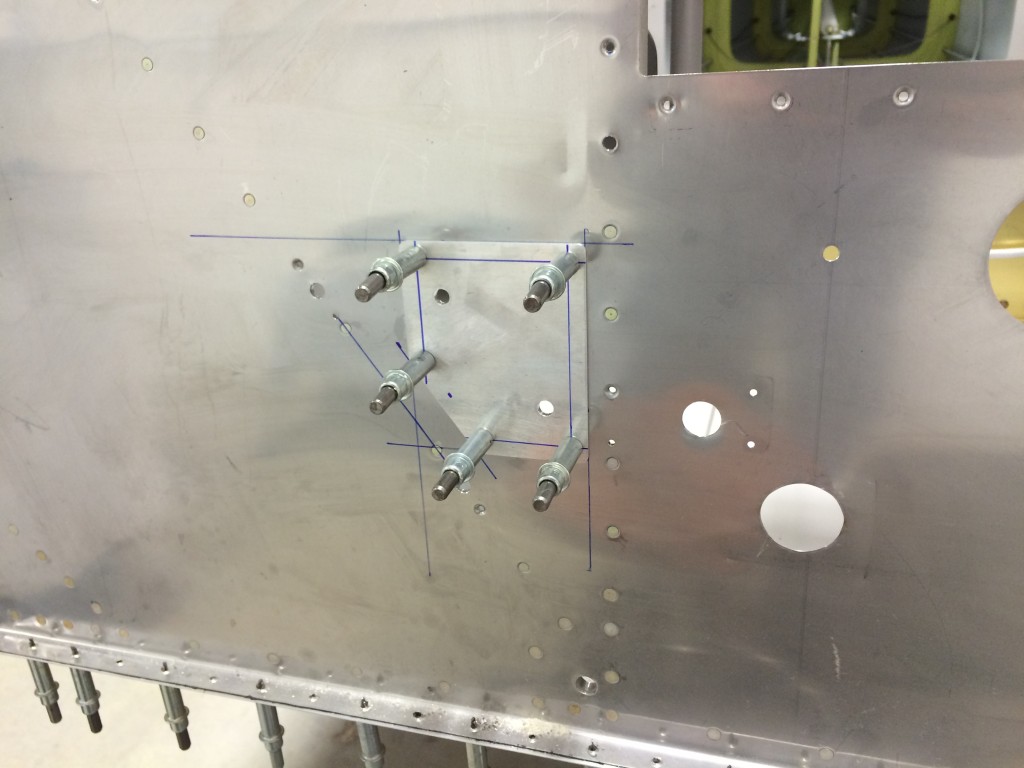 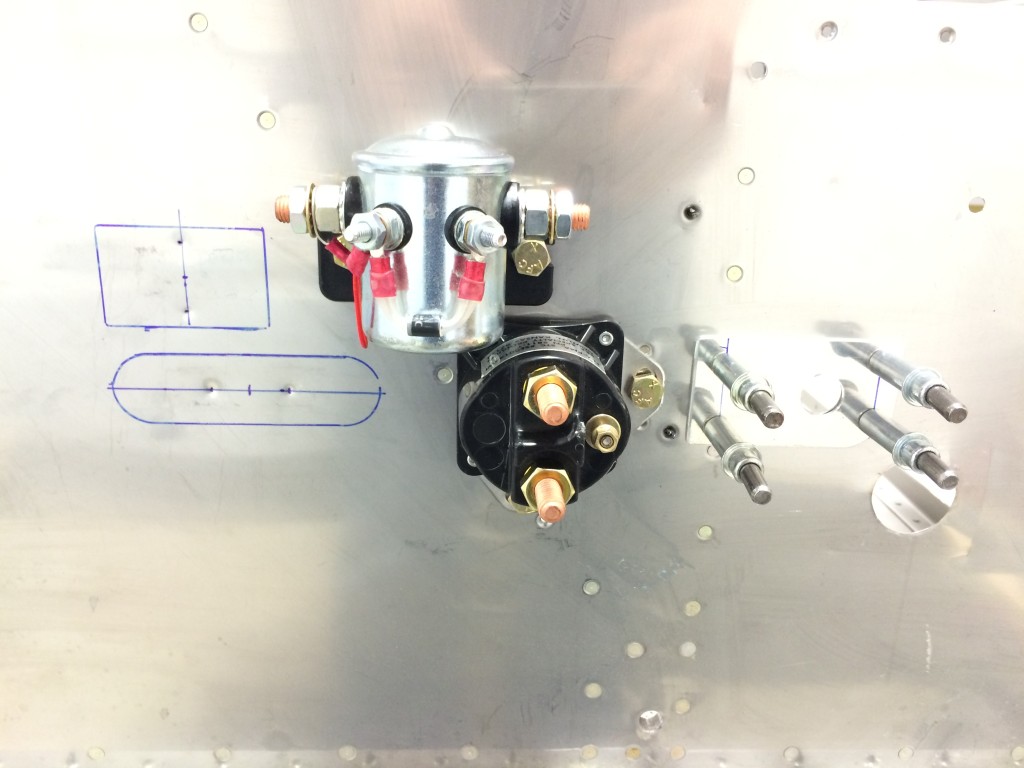 Battery and starter temp fitted, laying out location of ANL fuse holder and current-measuring shunt. The relative locations of the battery (top, silver) and starter (black, bottom) contactors was as close as I could get to Van’s plans locations while still accommodating the different style of starter contactor sold by B&C. 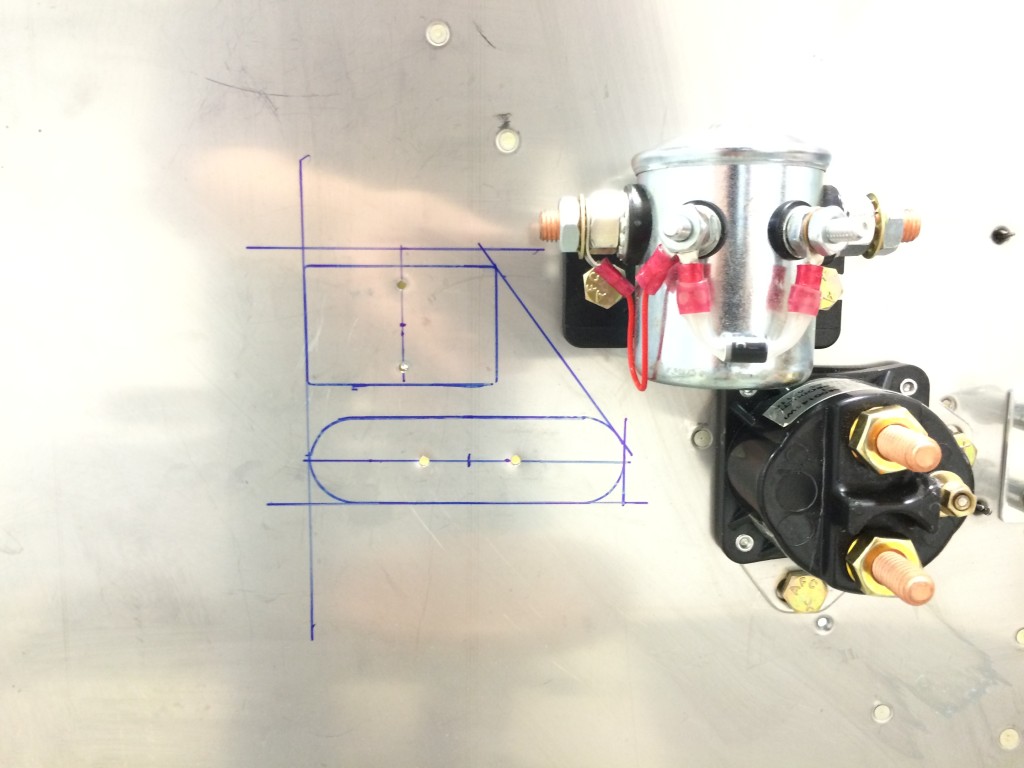 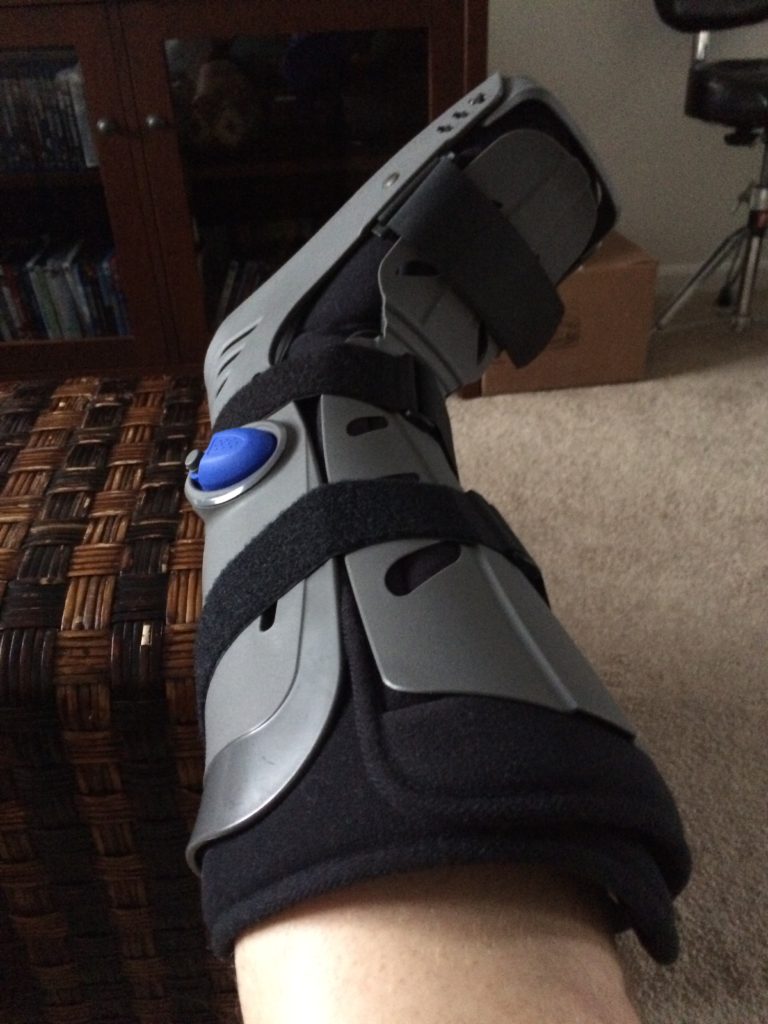 Mid-April – a running misstep led to a fractured ankle. No airplane work for a couple of weeks…this sucks. 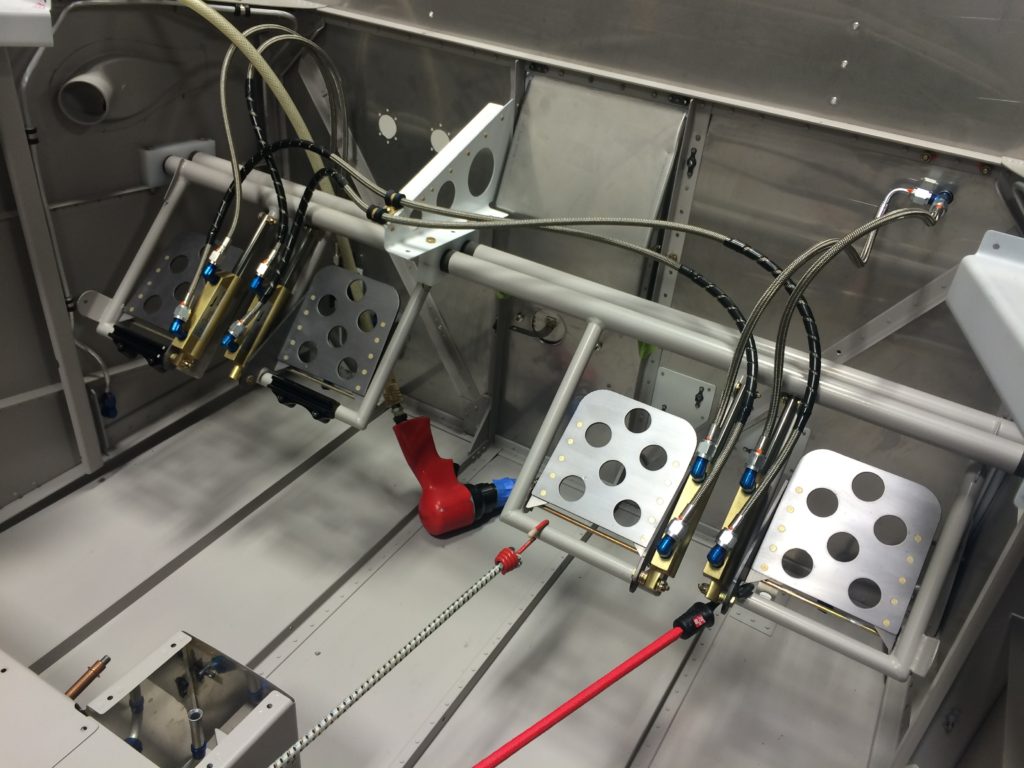 Back to work in early May despite the booted ankle.  With Ellen’s help, we got the contactor/fuse/shunt doublers and nutplates riveted to the firewall. 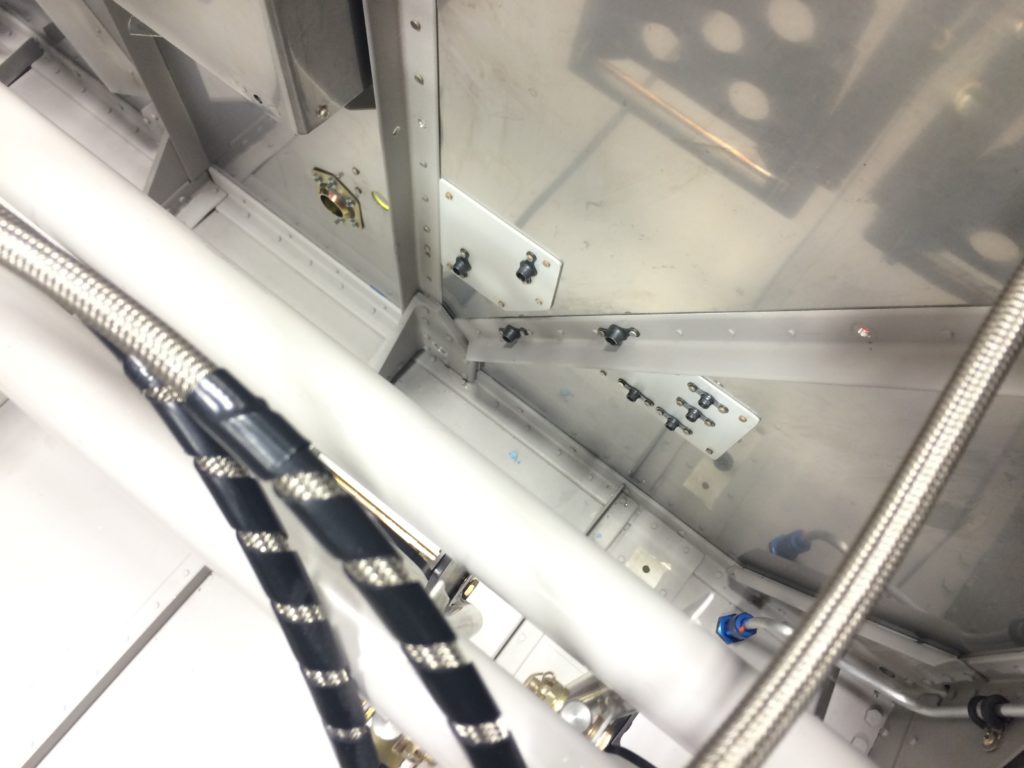 The result of an evening’s work – battery and starter contractor doublers and nutplates riveted to the firewall. 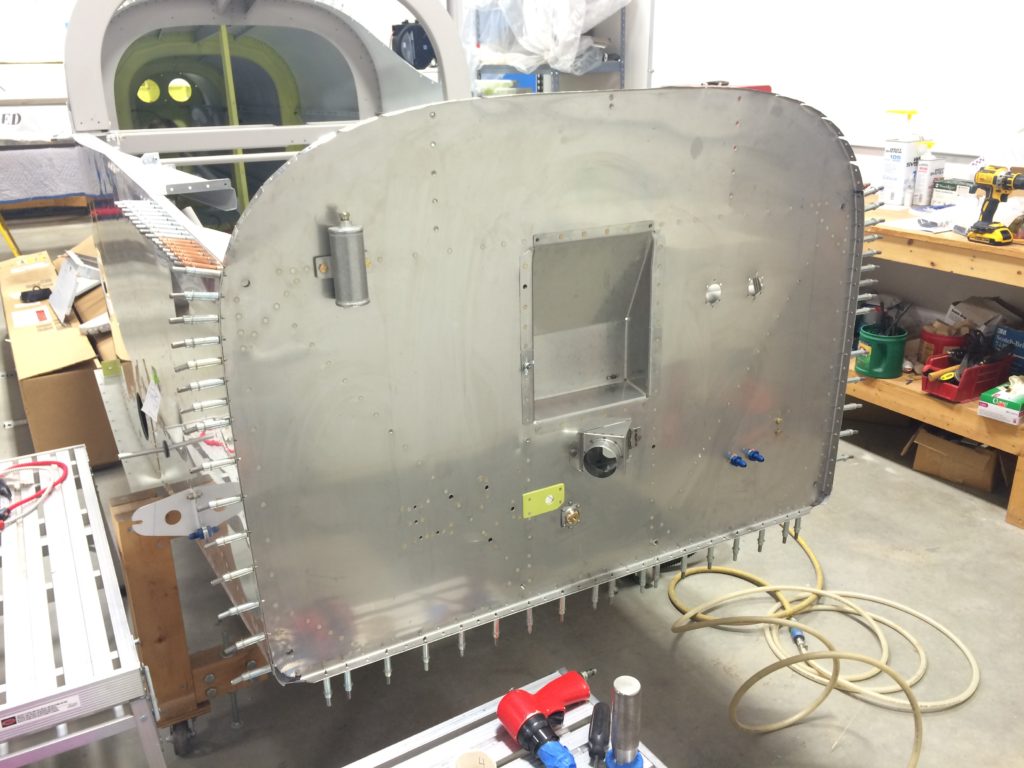 Everything (almost) is now riveted to the firewall, ready to install electrical components, battery box and control cable passthroughs. 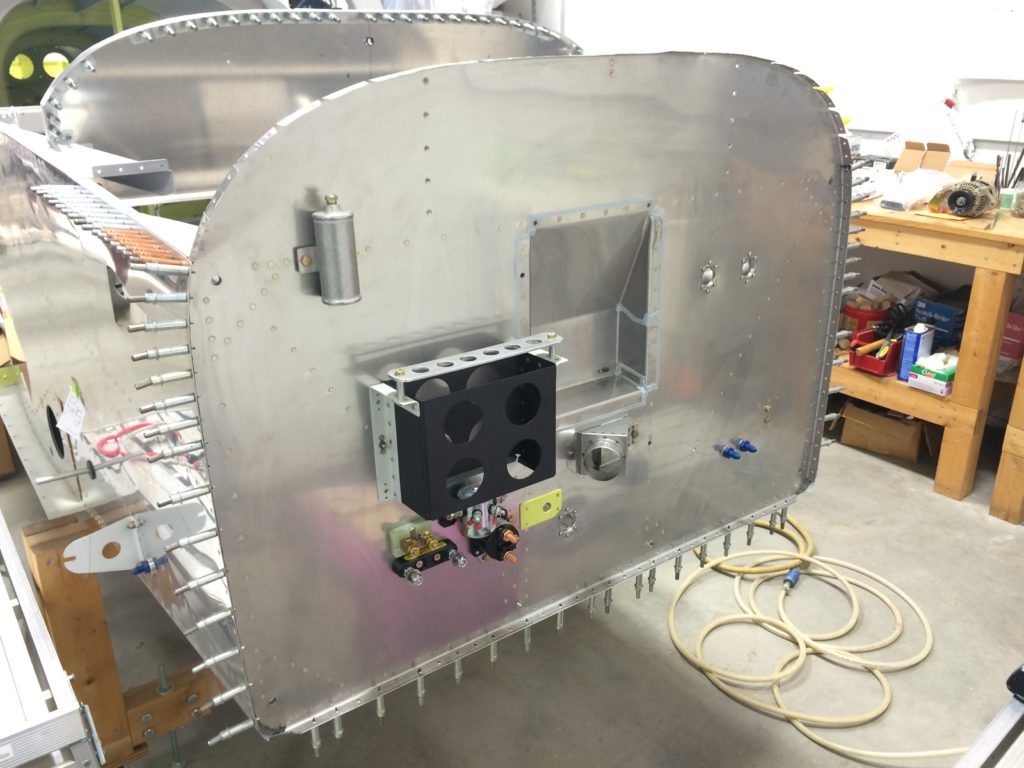 I was able to sneak away for a few hours and get most everything installed on the firewall. A few minutes of work for a nice little bit of visual progress. 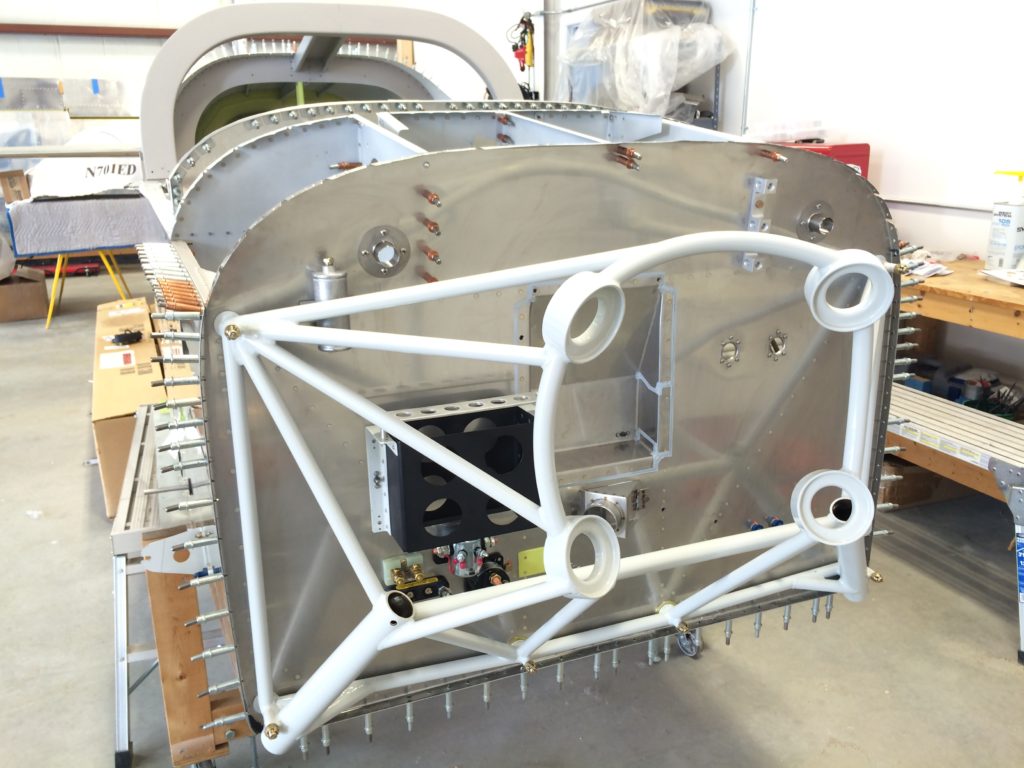 Fast forward a few days to finishing firewall prep and permanently reinstalling the engine mount. Ellen joined me at the hangar to help with fitting, bolting, torquing, hoisting and gear reinstallation. No more ankle boot, so moving around the airplane was a lot easier. 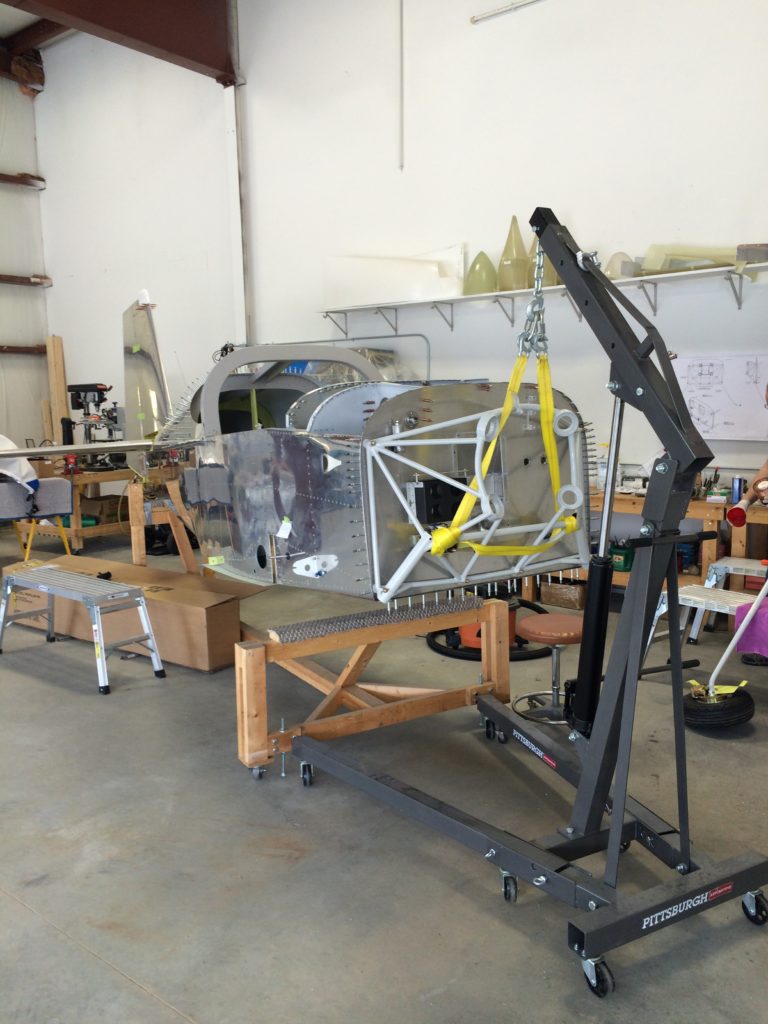 With the engine mount firmly and permanently attached, we hauled out the engine hoist and tow strap to get the fuselage high enough for the landing gear to be reinstalled. 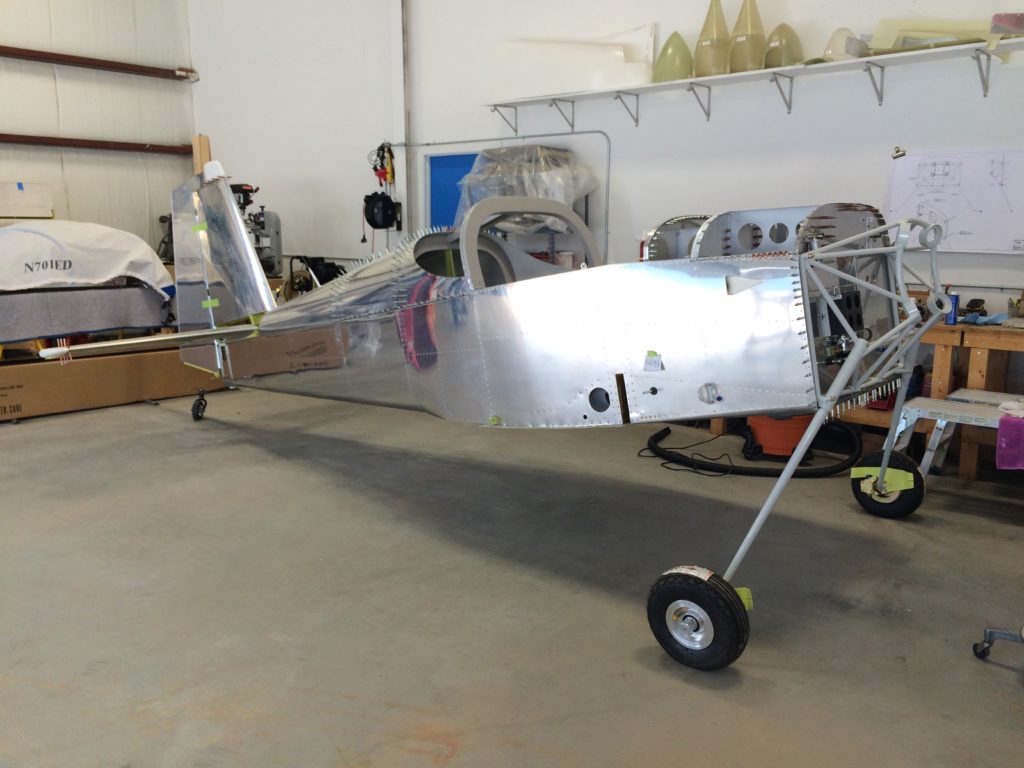 …and the fuselage is back on the gear for good. It’s engine hangin’ time!