Just when I thought I was done with fiberglass work on the empennage, a problem with the tail strobe/nav light proved me wrong.

I’m using Whelen’s LED nav lights and the tail light is just a little wider than the lower rudder cap can accommodate. Time to get out the Dremel saw and do some surgery… 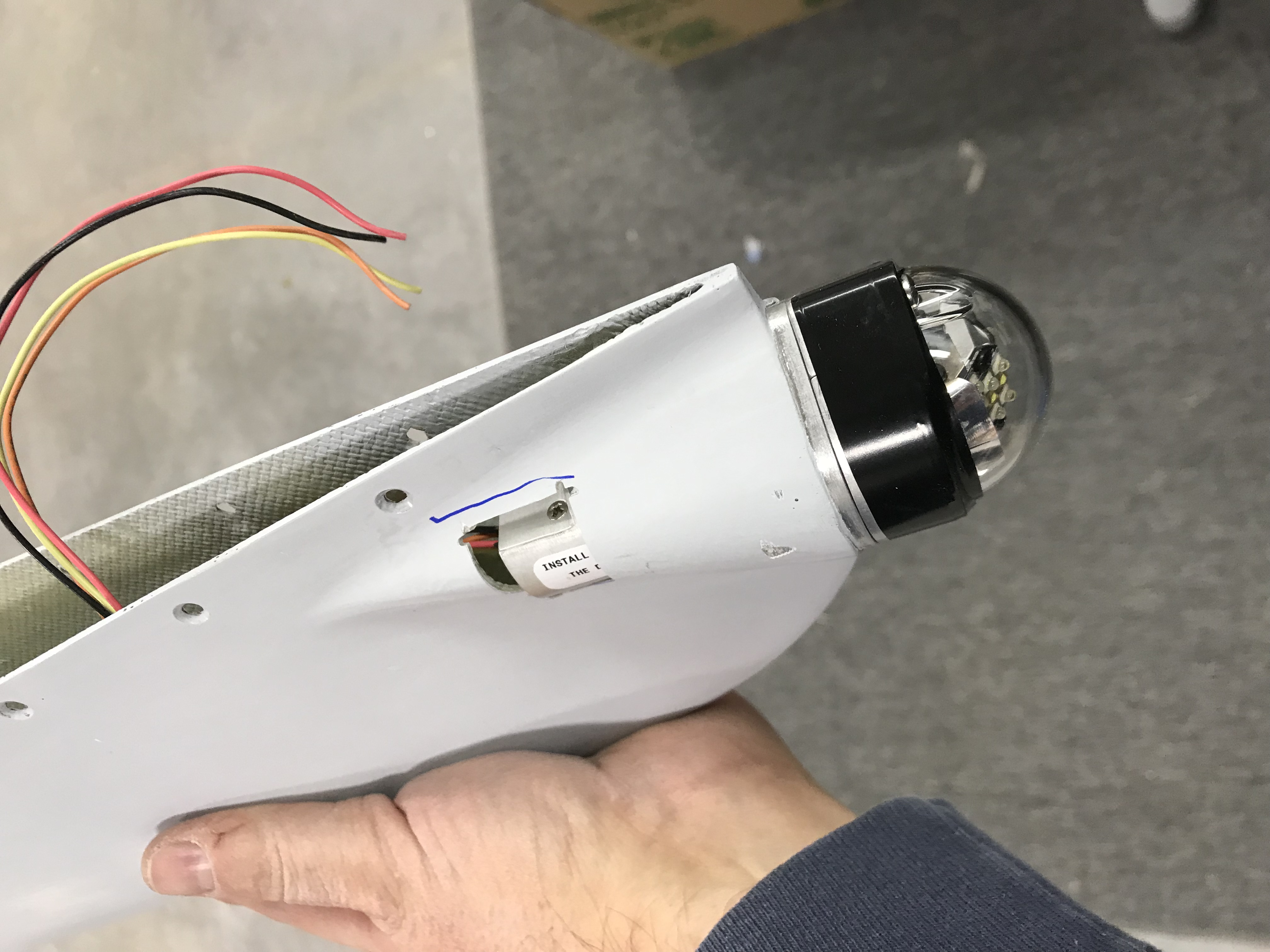 I did a rough cut to accommodate the electronics end of the light, then wrapped the light in packing tape as a release agent for the fiberglass I laid into the cutout area. 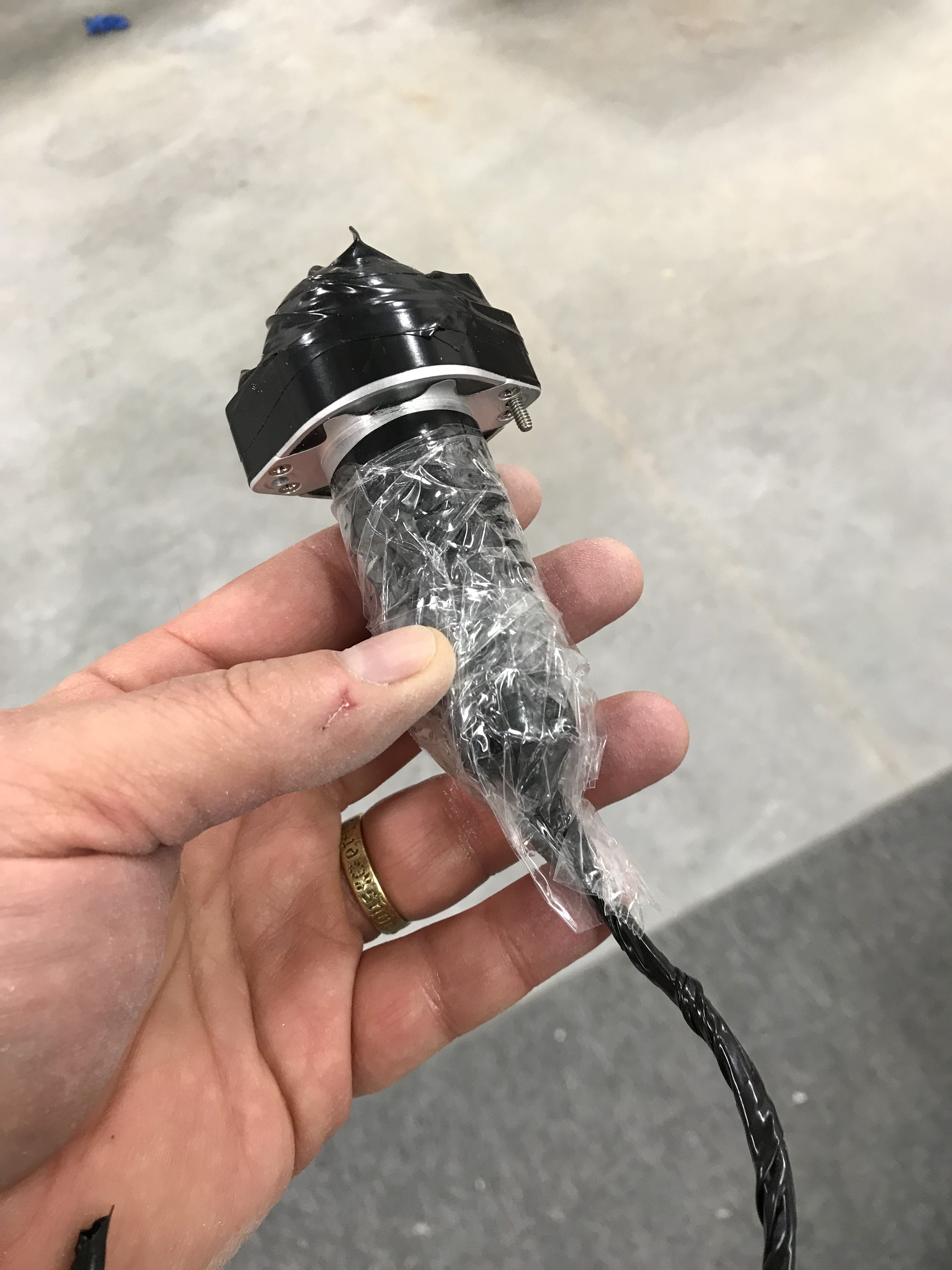 A bit of sanding around the cutout and I was ready for BID and resin. 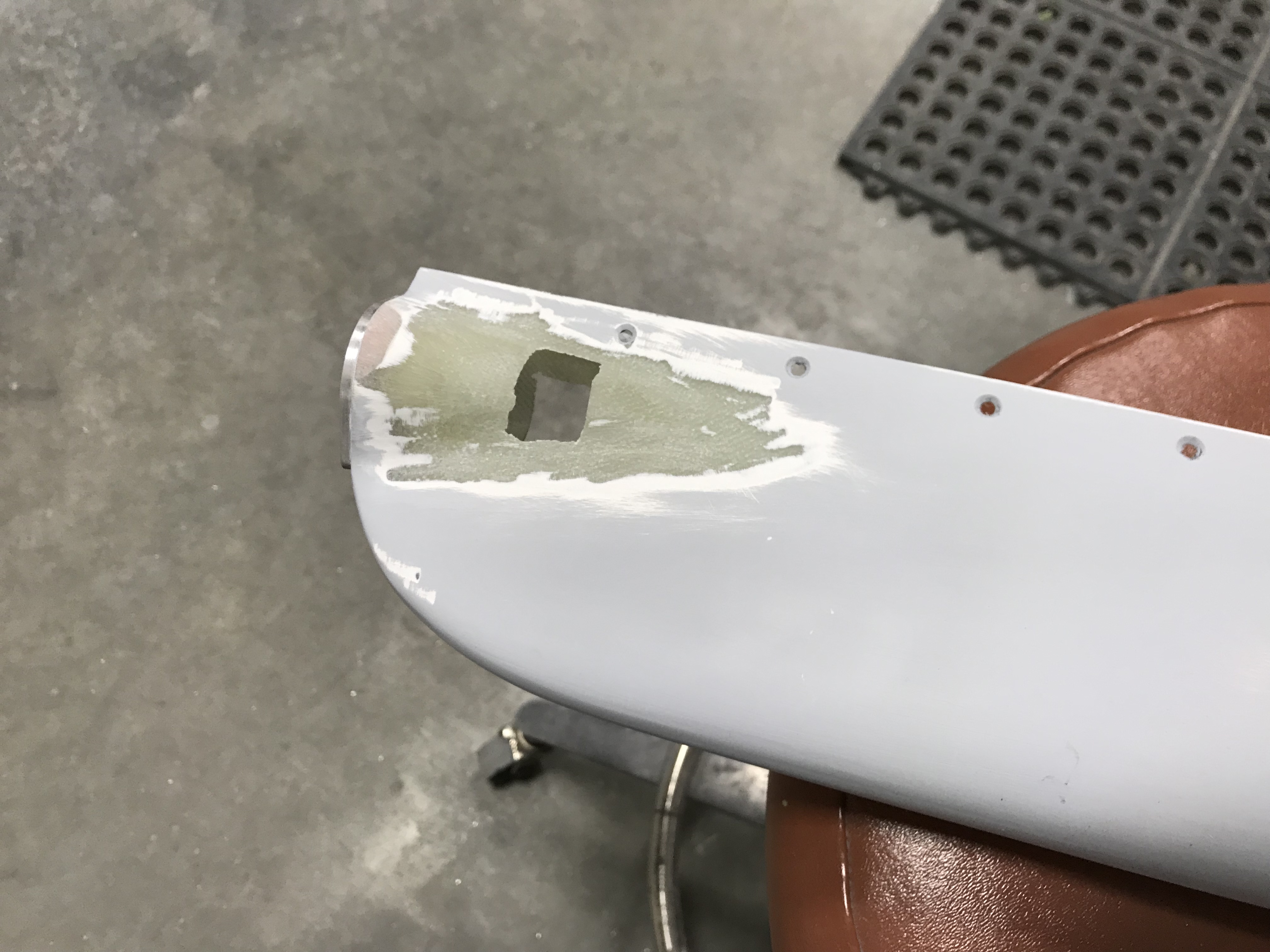 The end result…a nicely-faired tail light! I didn’t capture a picture of the modified fairing but the change is barely perceptible from the original installation. 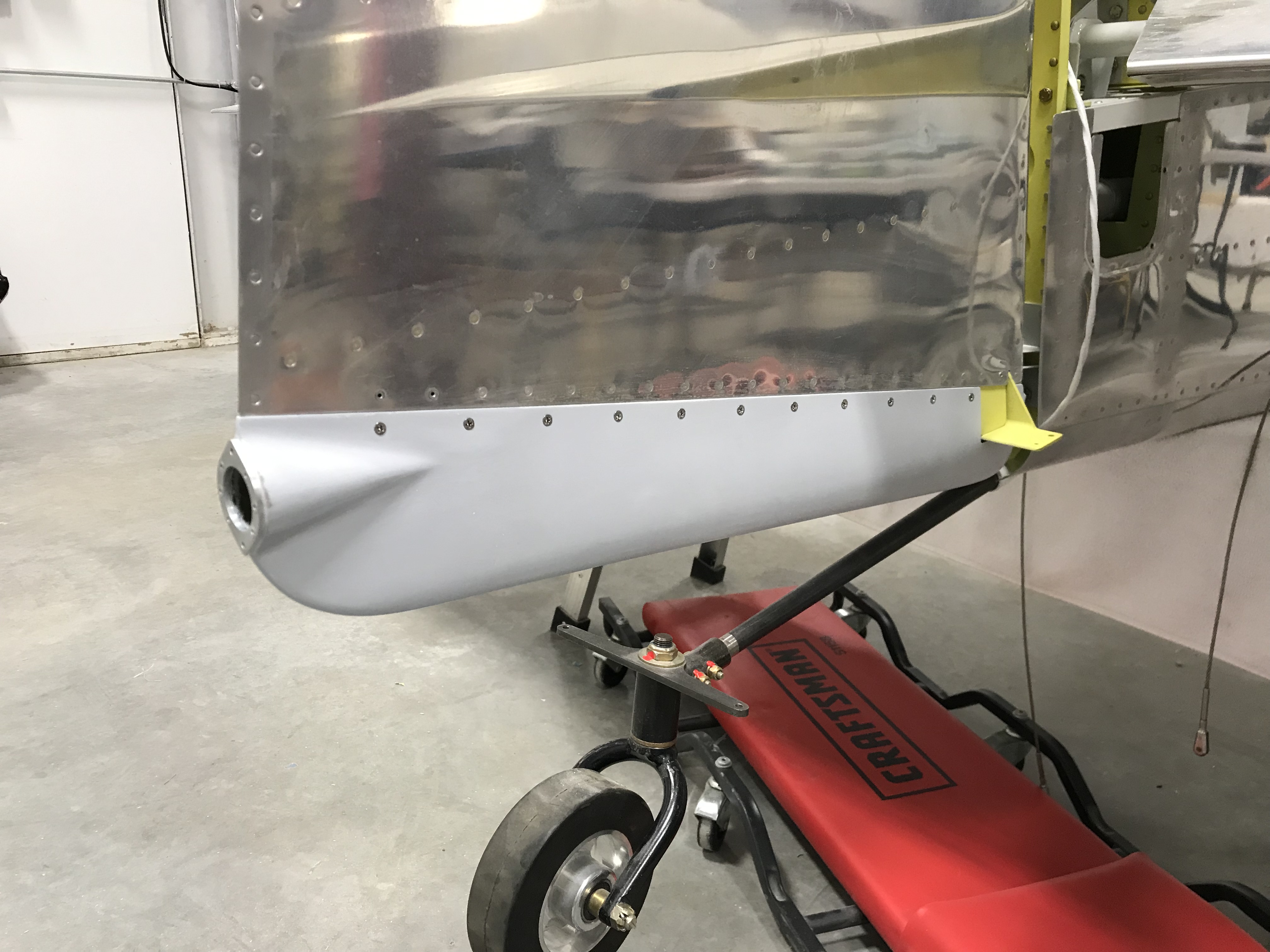 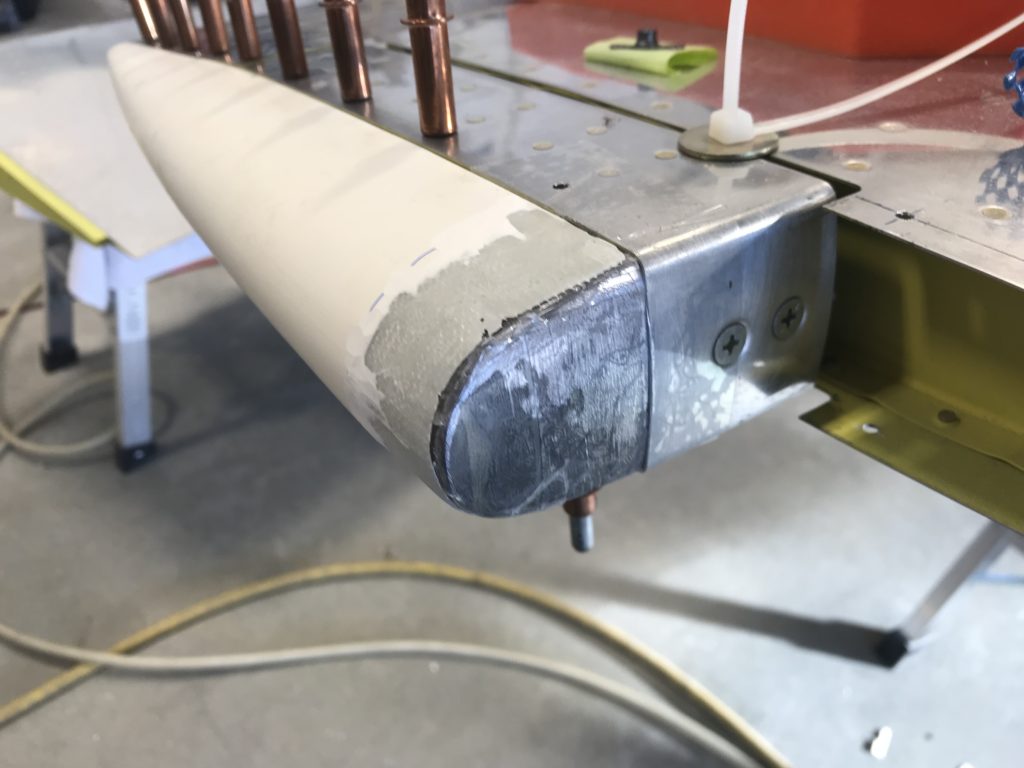 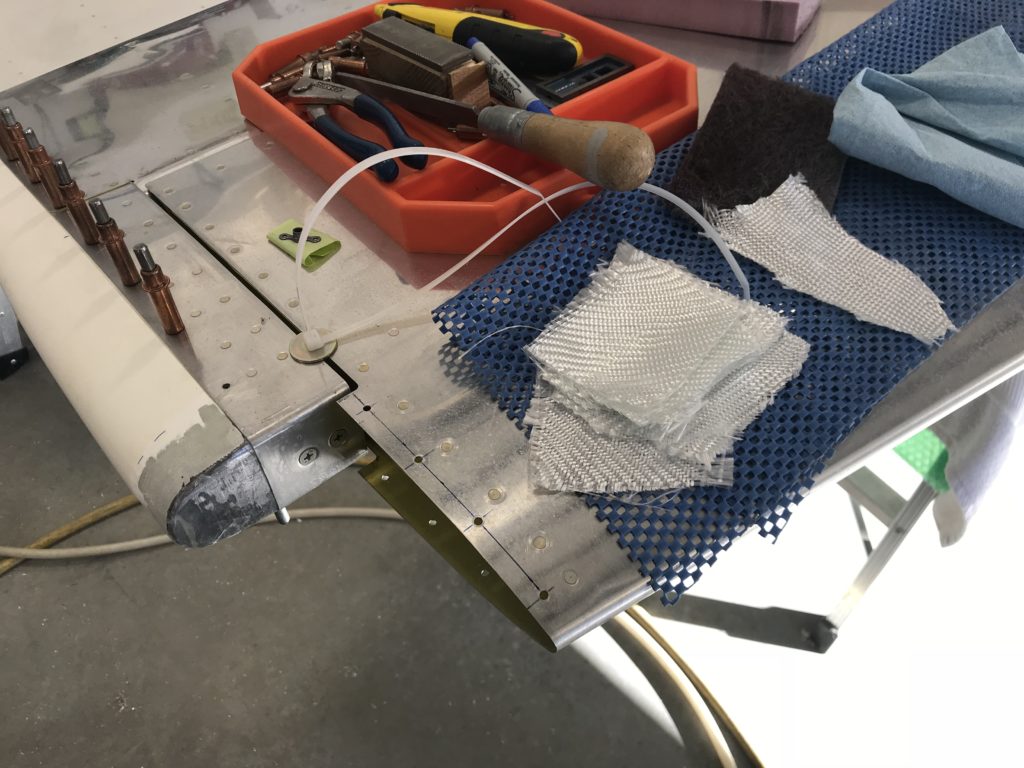 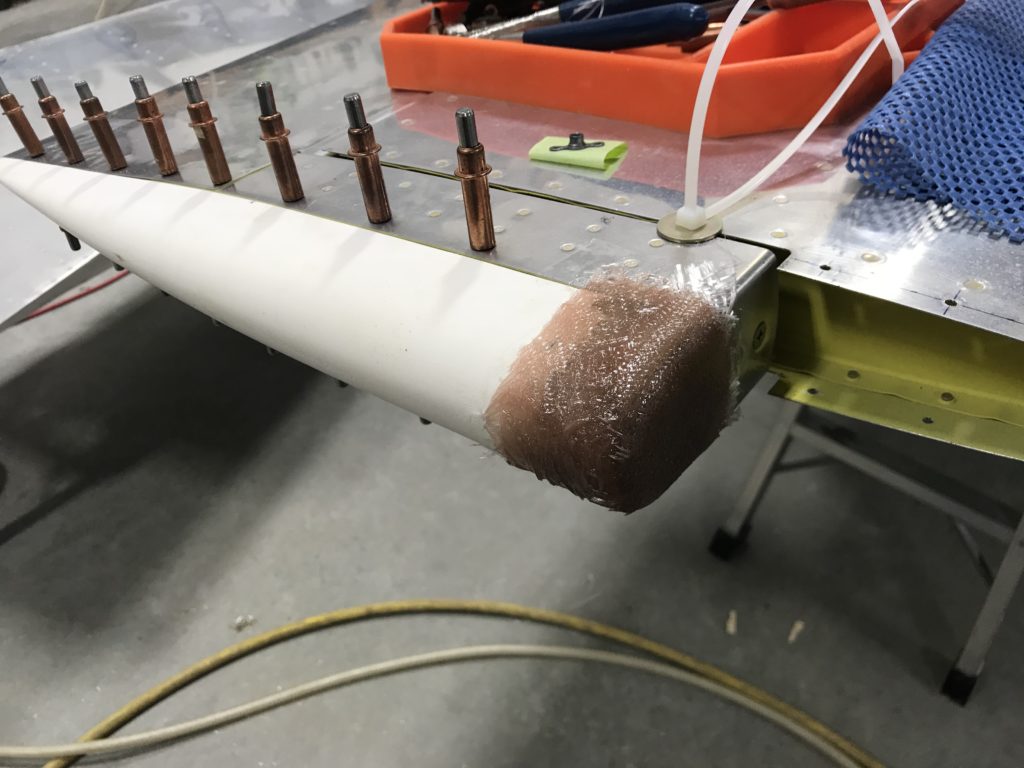 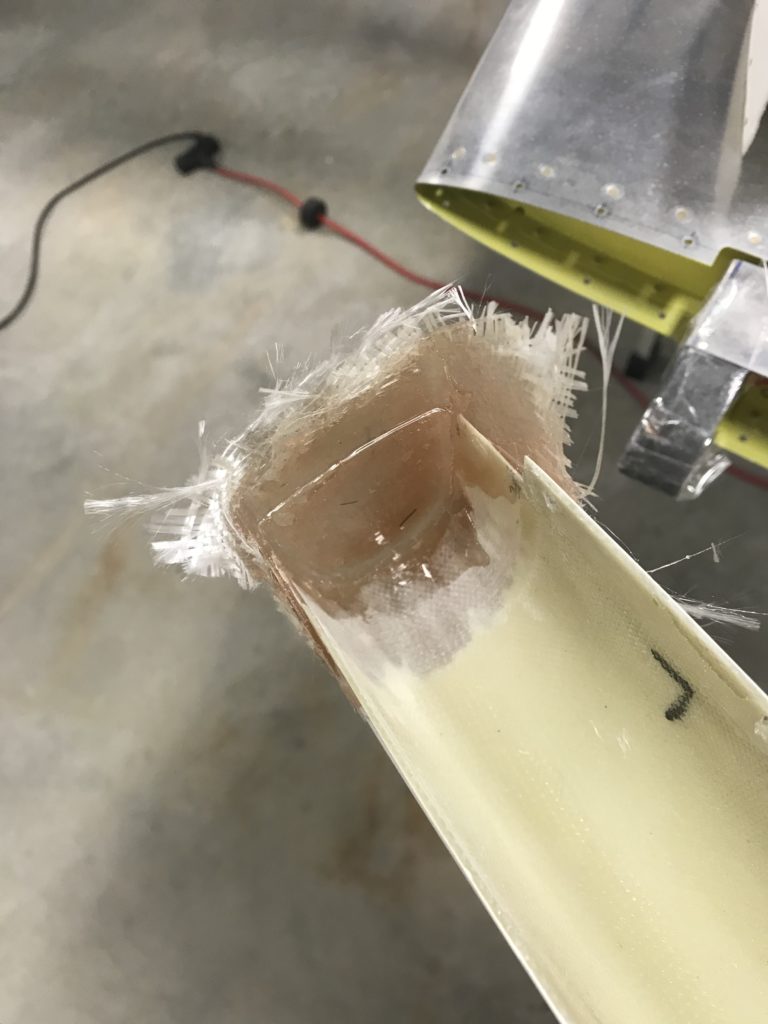 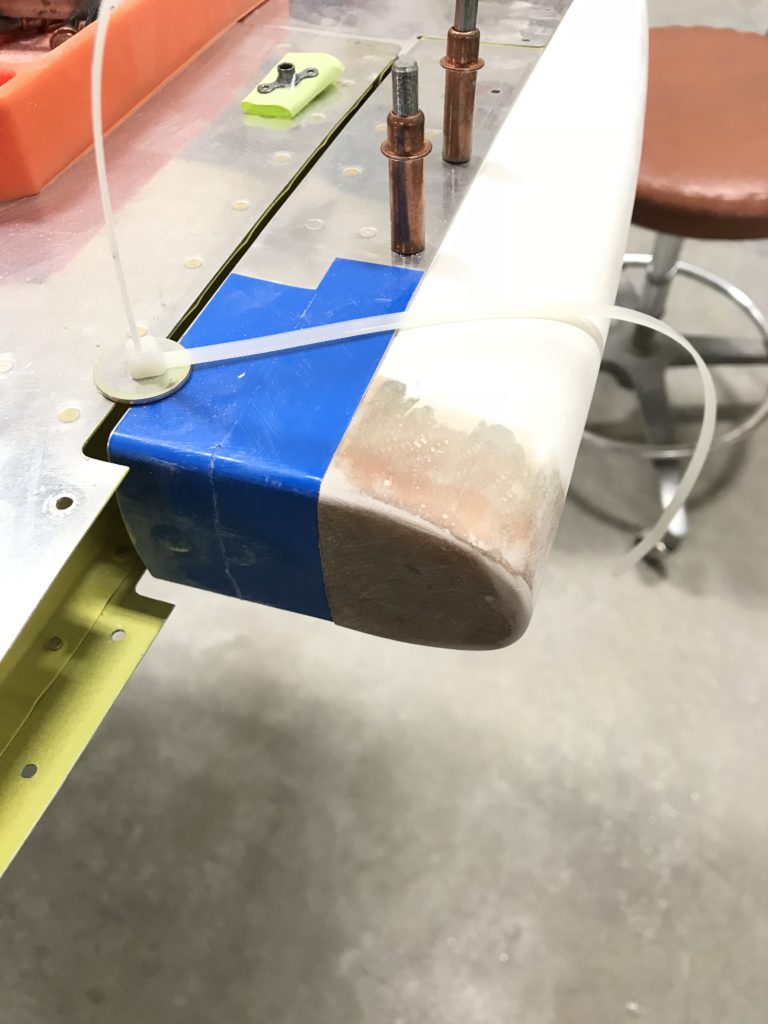 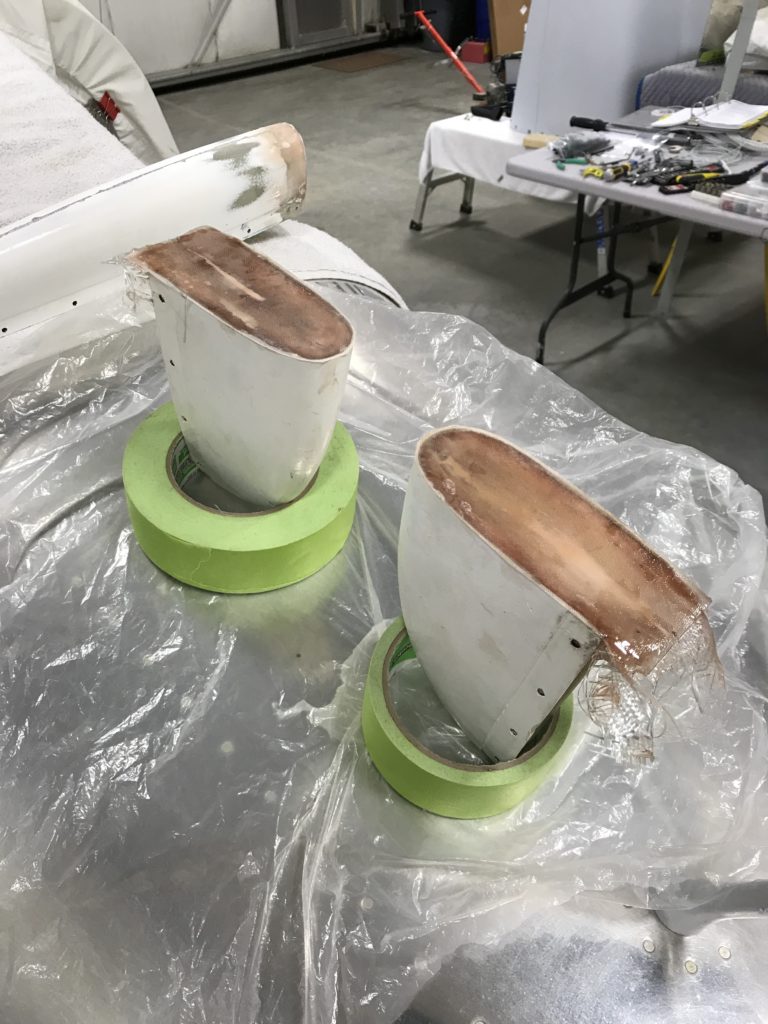 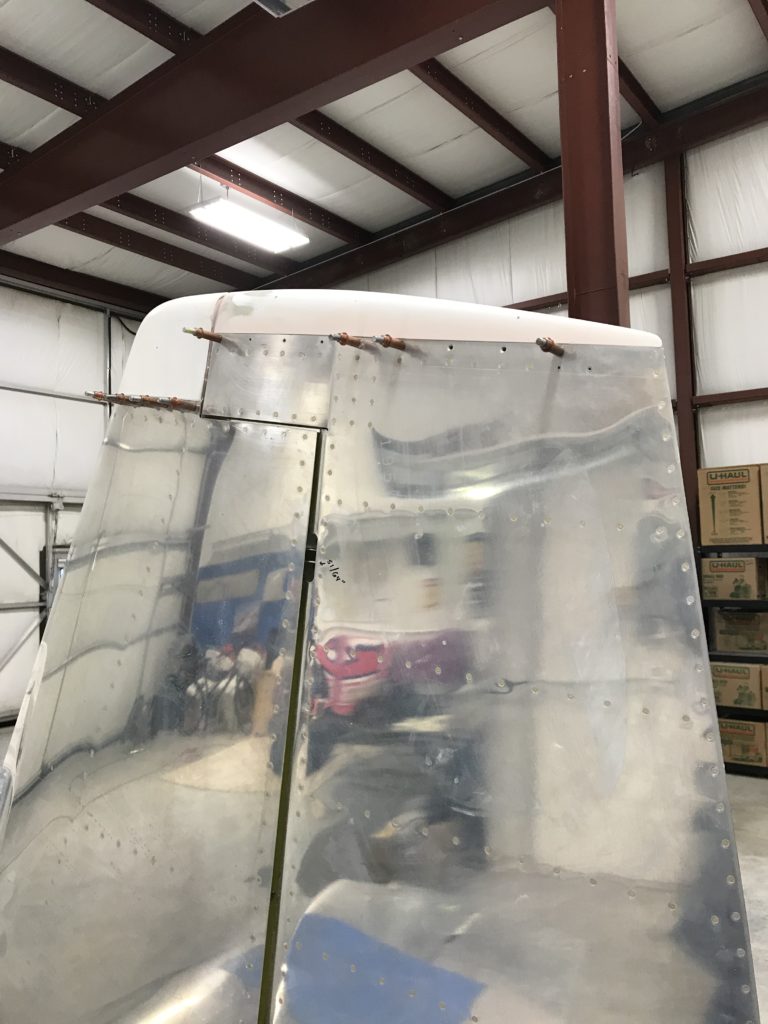 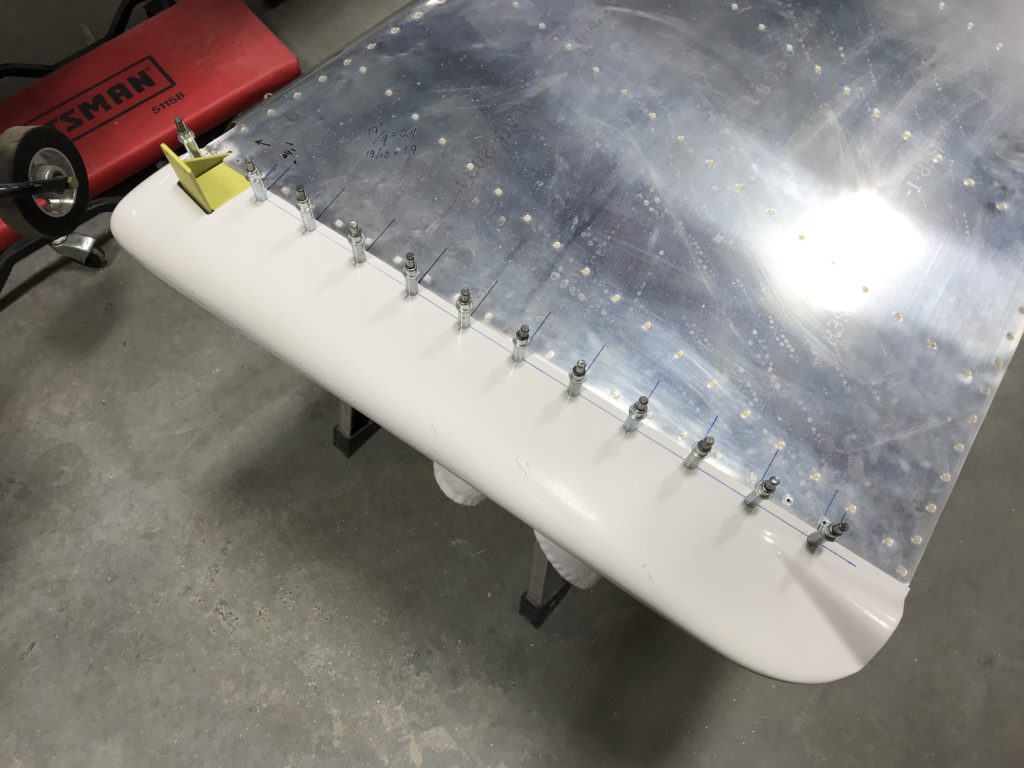 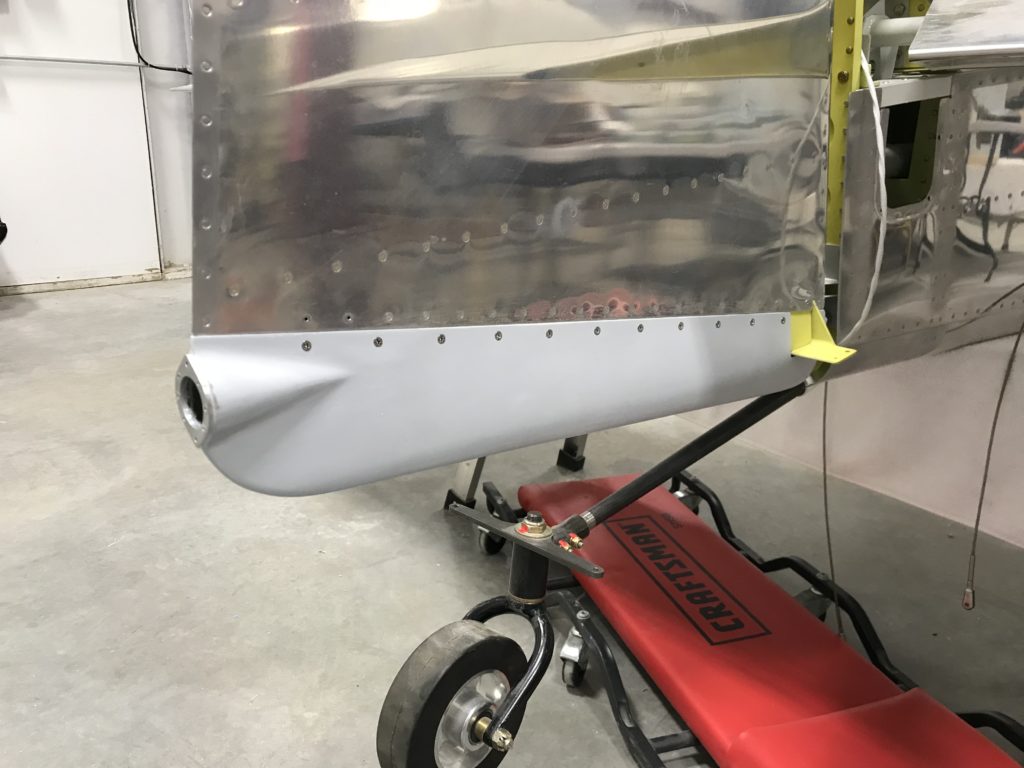 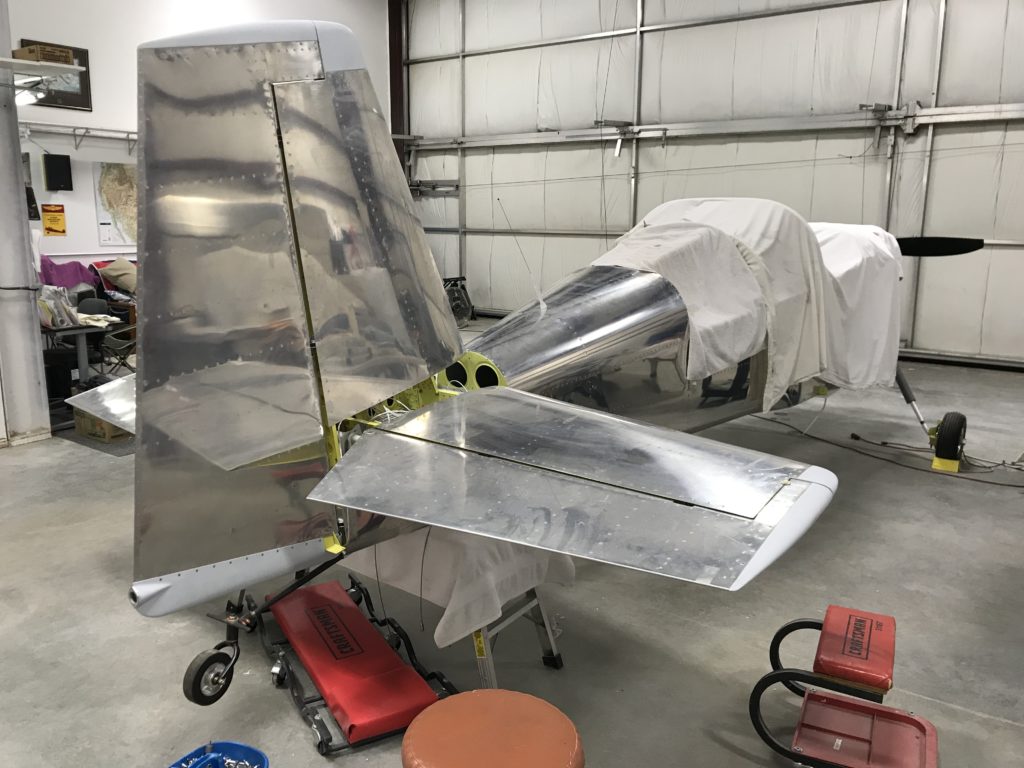 Over the course of this week I’ve been at the hangar a few times to take care of random stuff prior to mounting the wings.

Before we moved the fuse to the hangar, I installed and secured the rudder/tailwheel steering cables to the tailcone. It would have been good to check the plans and see which end of the cables attach to the rudder control horn (the two ends of the cable aren’t the same), but I neglected to do that.  Compounding that mistake, I had already fished the cables through several holes in the tailcone and aft fuse and installed snap-in plastic grommets in those holes that make it impossible to remove the rudder cable once they’re installed. As an extra bonus, the grommets can be installed with access to one side of a hole, but access to both sides of the hole is required to remove them – which is a problem in several places in the tailcone and baggage area where panels are already riveted in place that limit access. D’oh!

Other builders have made this mistake and wound up drilling out rivets and removing panels to get at the grommets, but I was determined not to do that. So…I went on a trek to Home Depot (there’s one about five minutes from the hangar – bonus!) and bought a small propane torch and an X-Acto knife.  A red-hot knife slices through plastic pretty easily, and working from one side of the hole, it’s not too hard to slice out the clips that hold the grommets in place. After an hour of heating and cutting, the grommets and the rudder cables were out.  30 minutes later, the rudder cables were installed the right way.

I also started working on the Emergency Locator Transmitter (ELT) mount.  Over the last several months I’ve been working out where to install the ELT and have never been very happy with a lot of the options I’ve seen, including Van’s own ELT/strobe mounting plate which seems far too flexible to ensure that the ELT will work when it’s supposed to.  Many RV builders regard the ELT as a bureaucratic nuisance and don’t care how it’s installed.  They’re certainly free to do as they see fit, but if the device has to be in the airplane, I want it to work as it’s designed to.

My friend Andy mounted his ELT on the horizontal bellcrank rib, which seems like a good place for both longitudinal strength and access for installation, testing and battery changes.  The only downside is that the rib doesn’t have a lot of lateral stiffness, and theoretically the ELT mounting surface should withstand a 100-pound pull in any direction without deflecting more than 0.1 inch.  I came up withe the idea of fabricating an L-shaped reinforcement plate to provides extra stiffness, and had my fellow FAA DER Tom – who’s a structures engineer – run the numbers to make sure my design would be strong enough while not impacting the existing structure. 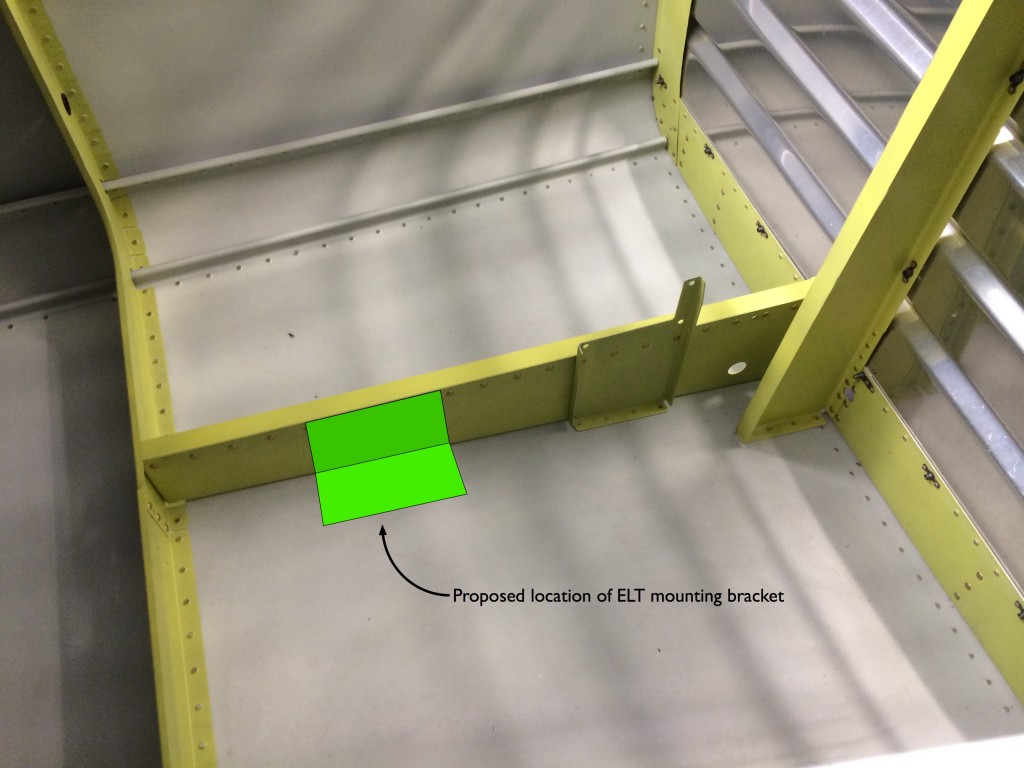 It turns out from Tom’s analysis that a piece of 0.040″ 7075-T6 aluminum sheet, bent into the required L-shape, will do the job nicely.  It will be held in place on the vertical flange with ELT mounting bolts and the rivets which also attach the bellcrank stiffener angle, and on the horizontal flange with some AN426-3 rivets.  Easy peasy!  The only downside is that my candy-ass little Harbor Freight bending brake won’t handle 0.040″ 7075 sheet, so I’m gonna have to find someone with the appropriate tools to make the bend.  Stay tuned…

And the leading edge is finished. Closing the middle and lower sections was a four-handed operation; I squeezed the leading edges together while Ellen inserted clecos. The process was repeated after final-drilling the holes to #30 and deburring them.

And with the leading edge finished, the rudder is finished. After all the hassle with rivet guns and the tedium of setting trailing edge rivets, I’m pretty happy with the results.

Gotta have at least one picture of me and a finished product. Look close and you’ll see Ellen in a reflection from the rudder skin.

The next adventure in learning was how to roll and close the rudder leading edge. I bought both 7/8″ and 1″ dowels from Home Depot, not knowing which one would work better. As it turns out, the 1″ dowel is a better choice; following Van’s directions with a smaller diameter dowel leads to a rolled edge that has a lot of curvature toward the front edge, but not enough at the rear edge (next to the spar) to make closing a little easier. I tried moving the dowel a little closer to the spar, but it was tough to get it to stay there. Generally after a couple of bends on each side, the edge was ready for closure.

I used Van’s recommended procedure for setting the trailing-edge rivets, with a few exceptions. First, I used the pneumatic squeezer to initially set rivets in the sequence recommended by the manual. Then I used the back-rivet set to get the shop heads parallel with the trailing edge. And finally, I used a swivel flush set on the manufactured side make each shop head as flush as possible with the skin. The last two steps were done to groups of four or five rivets at a time – hit one side with the back-rivet set, then flip the rudder and finish up with the flush set.

And the result? The trailing edge was straight to within 0.04 inches, which beats Van’s requirement of 0.1″. If you sight down the edge you’ll see some very minor pillowing or waves in the edge, but overall I’m satisfied. And there was much rejoicing. Yea.

I couldn’t stand it any more…it was time to get that trailing edge started. I had a 6 oz. cartridge of Proseal sitting around, mixed it up and popped it into the Semco pneumatic dispenser. The Semco gun didn’t work as well as expected, but it worked enough to get the wedge Proseal’d.

Bring on the proseal!

Almost ready to proseal the trailing edge together – here’s the rudder with upper and lower ribs mostly riveted, plus that spiffy wedge with all those beautiful countersunk holes.

The new yoke from Avery arrived yesterday afternoon, and was put to use today riveting the left rudder skin to the spar. Much better results this time! I neglected to take any new pictures, so just look at the pictures above of the rudder clecoed together, and imagine that the clecos aren’t there.