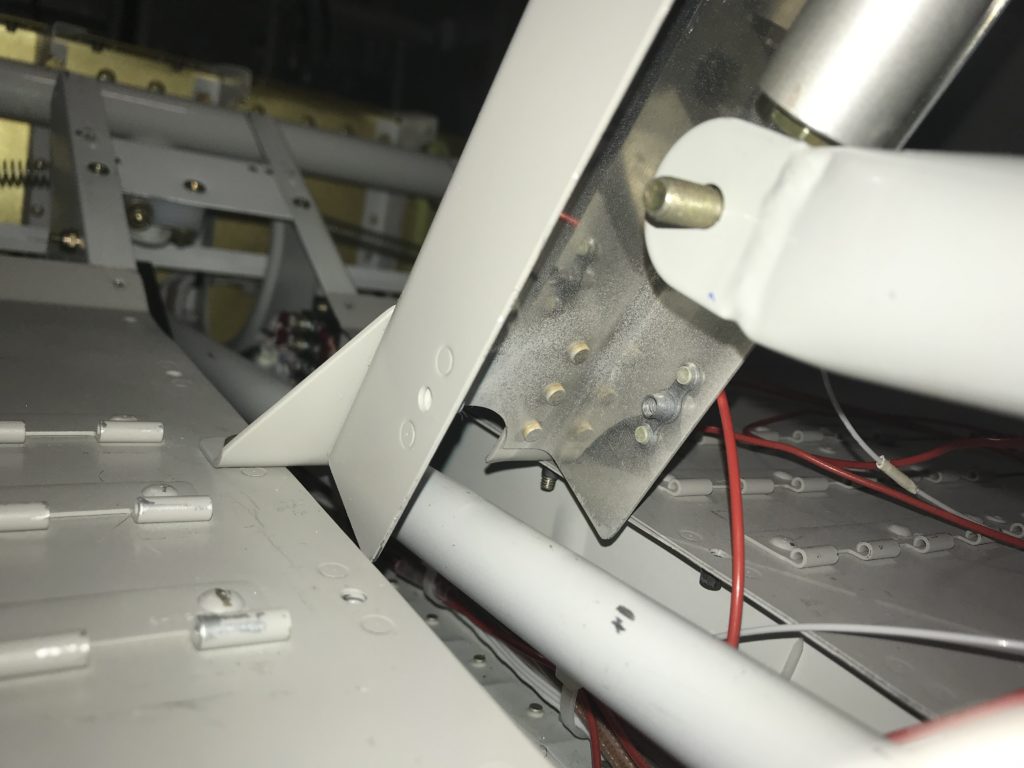 The only place I could think of for the switch was right at the front of the flap arm, which is at its lowest point when the flaps are up. I thought I’d do something really spiffy and adjustable… 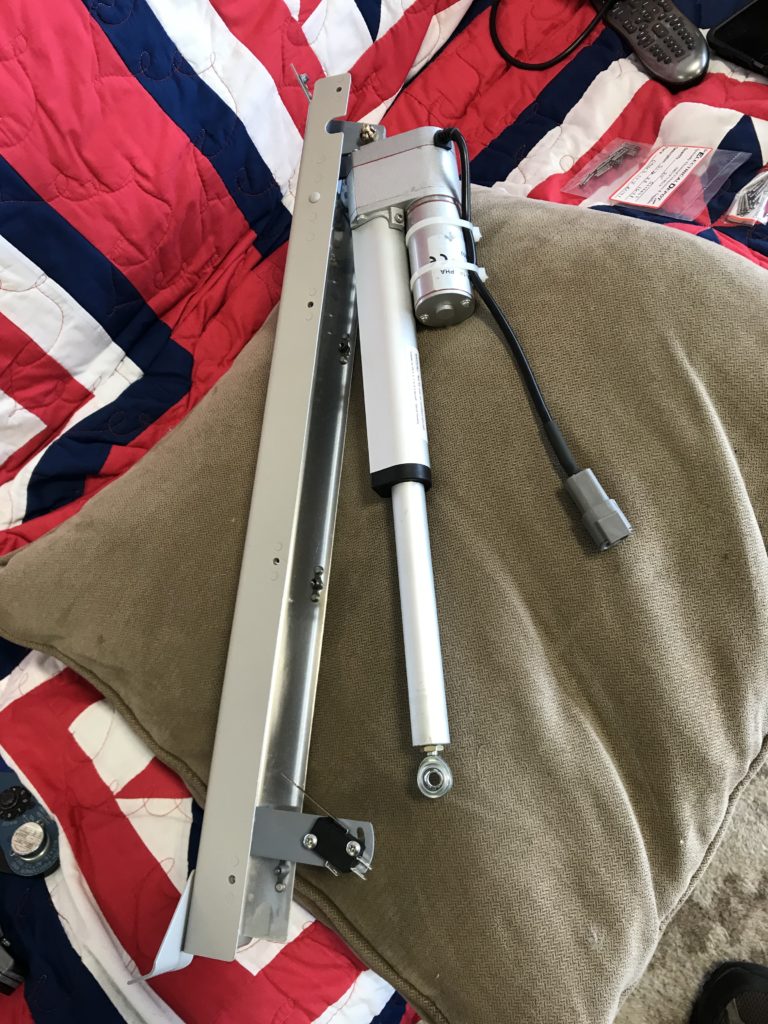 …but that didn’t work so well because the bracket (dark grey thing with the black switch attached) was too long and interfered with the elevator pushrod. 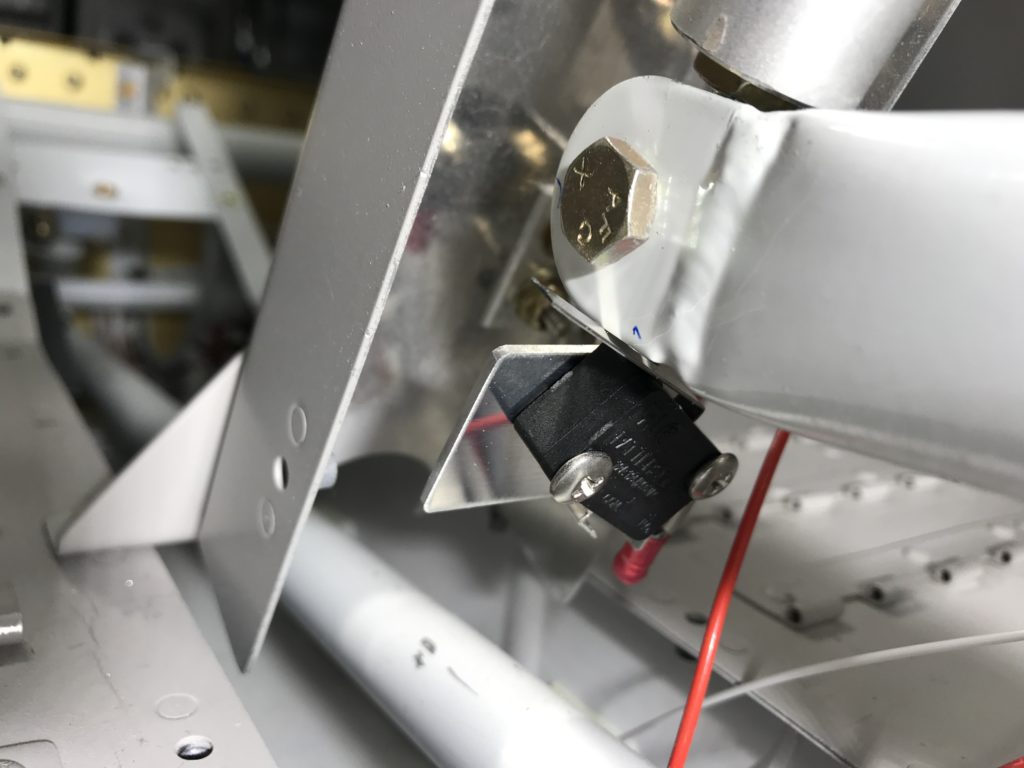 Going back to the drawing board, I put a 90-degree bend in the bracket and rotated the switch so that it’s activated by the flap arm clevis. Works great, and there’s enough play in the switch that I can adjust it later if necessary.

Turns out that was the easy part. This switch grounds a wire coming from the AoA computer, so I had to run a wire from it to the central ground block in the elevator pushrod tunnel. That took most of an evening, but it’s done and the AoA computer now shouts “flaps” through the intercom when the flap-down motor is activated. 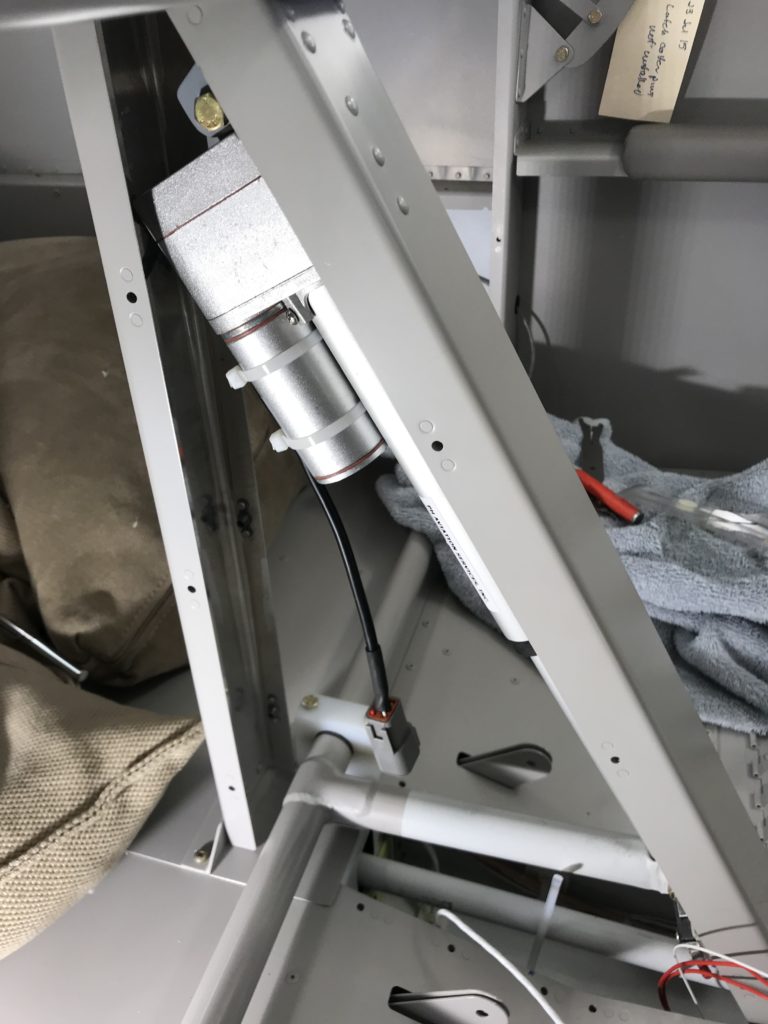 And here’s the installed flap motor with a Deutsch DTM connector all ready for plugging in to flap power and position sensor inputs for the GEA-24 and GAD-27.

Finally getting a lot of little cleanup tasks done while the avionics harness is percolating at Approach FastStack.

First, I installed this… 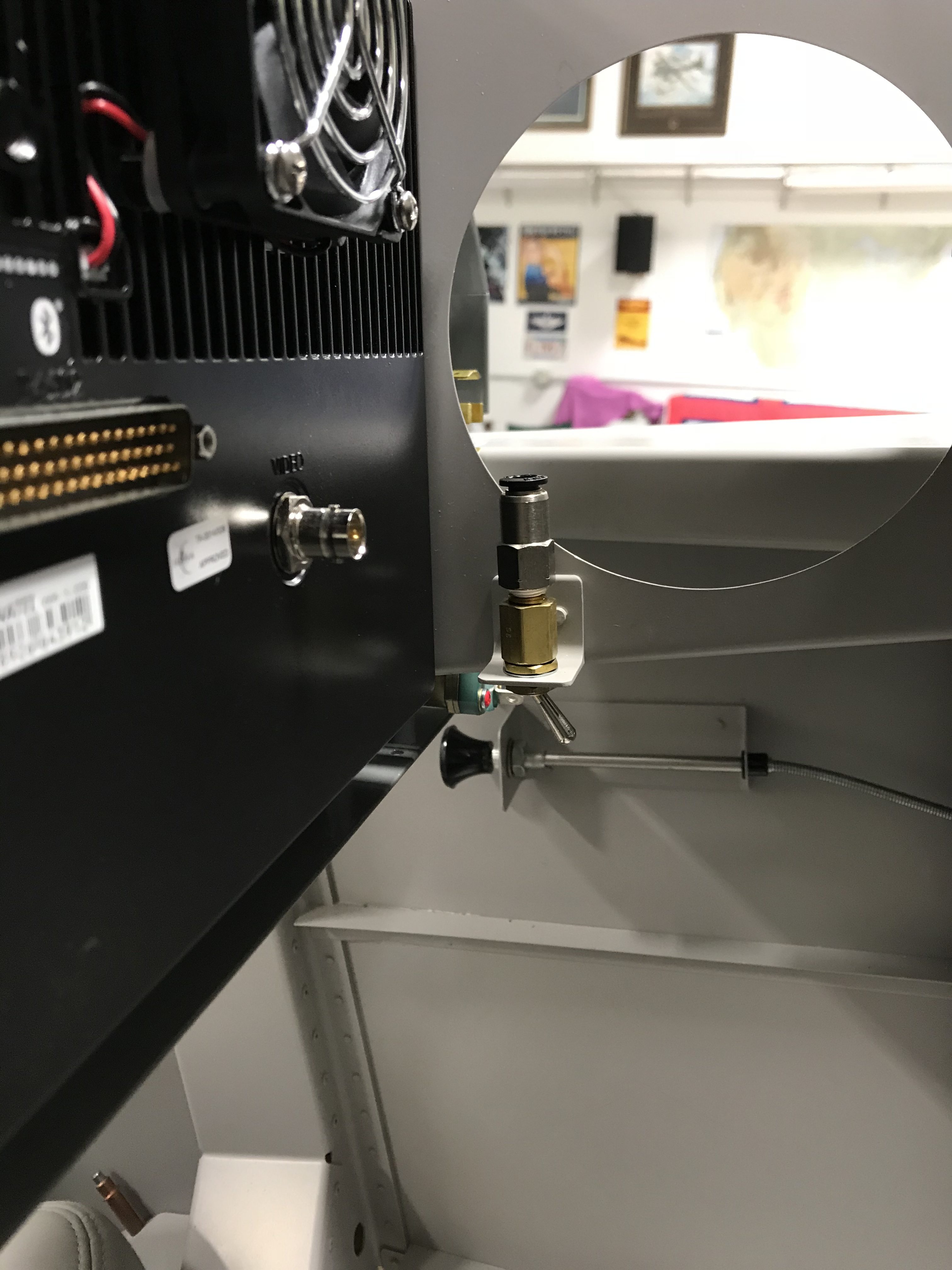 First person to guess what it is gets a ThermosWorks sticker or a free beer at Oshkosh 2019.

Second, I dug out the cockpit lights from Oplite and fabricated a small bracket to mount them on the roll bar support. 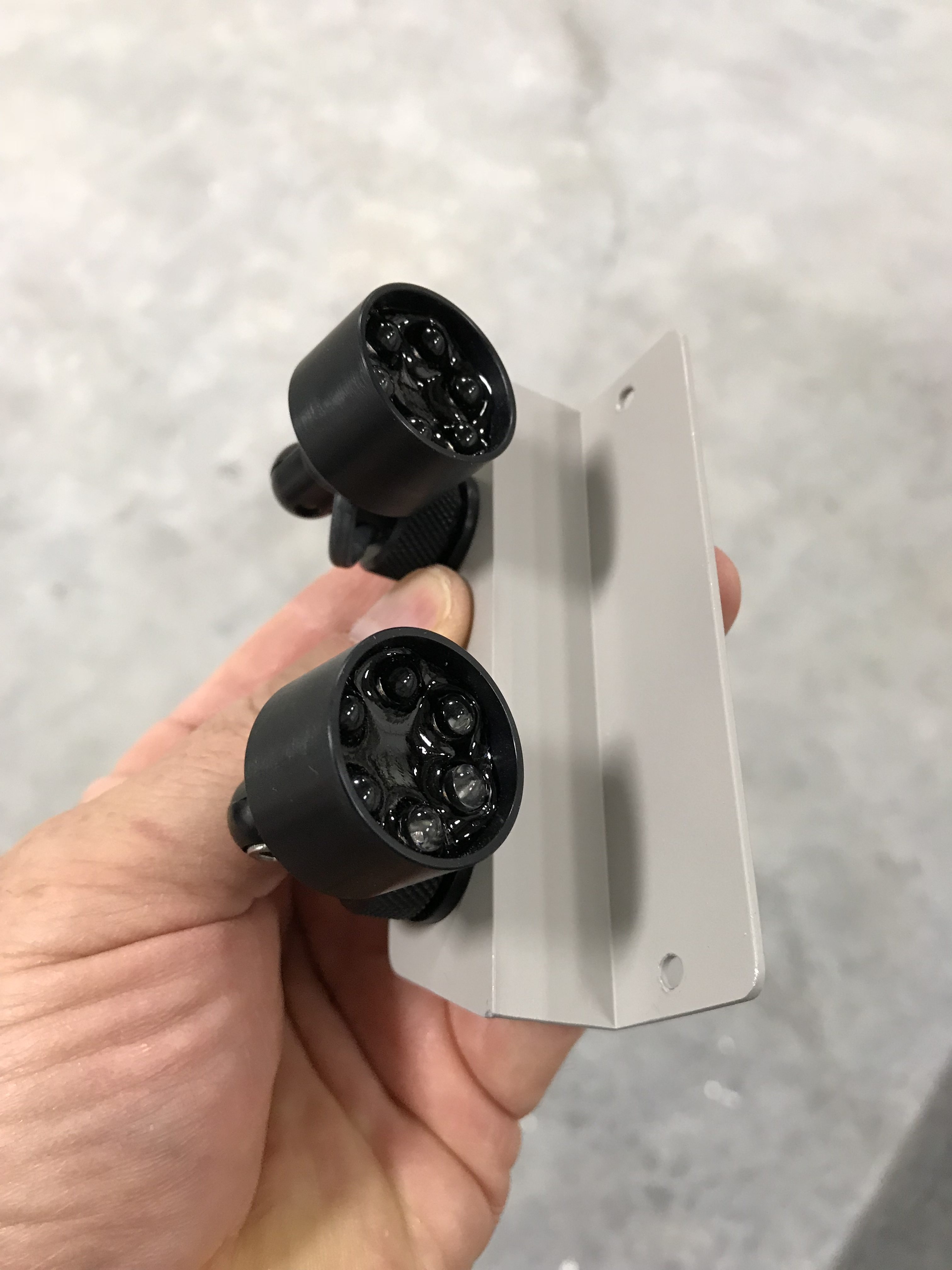 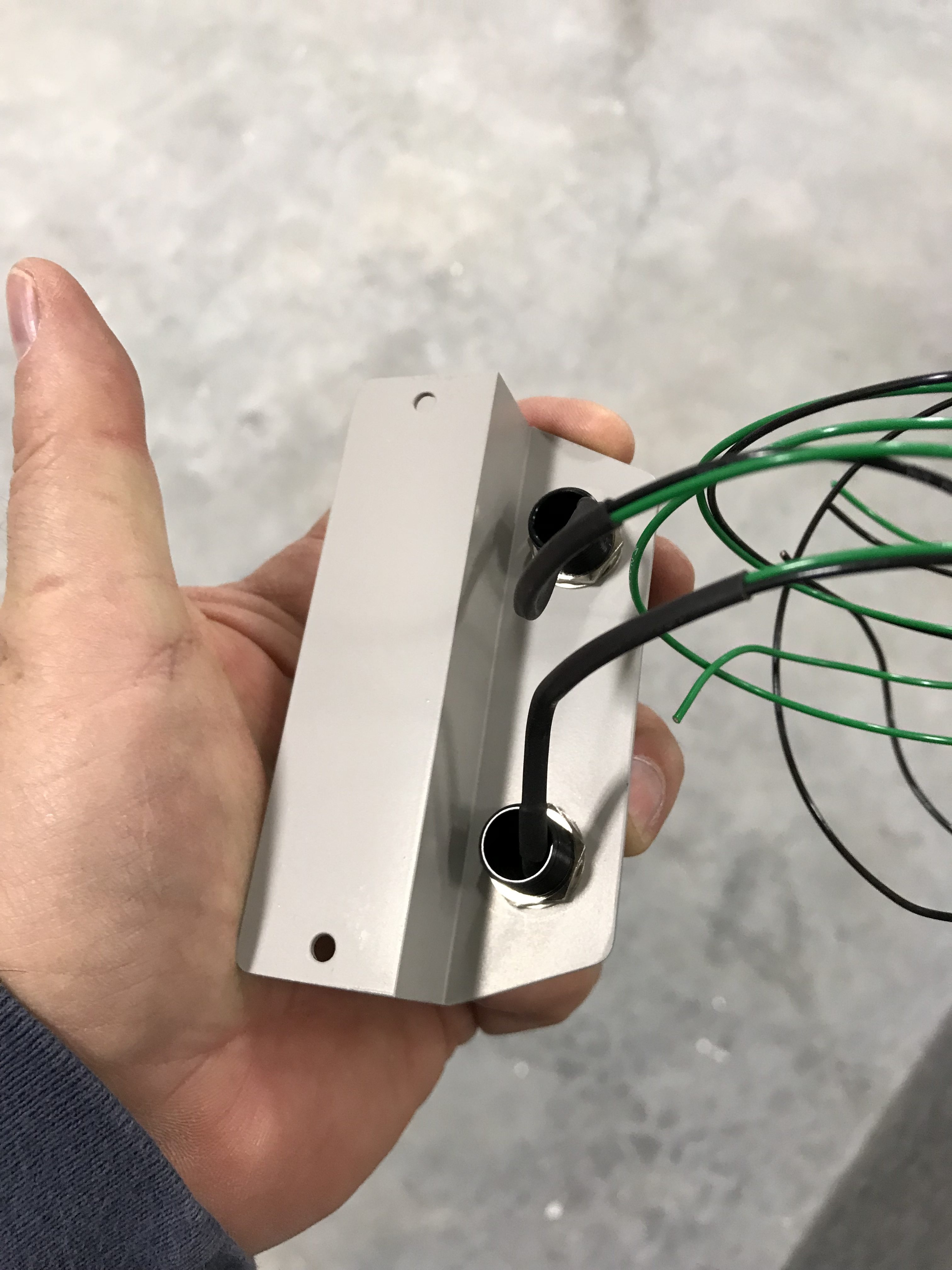 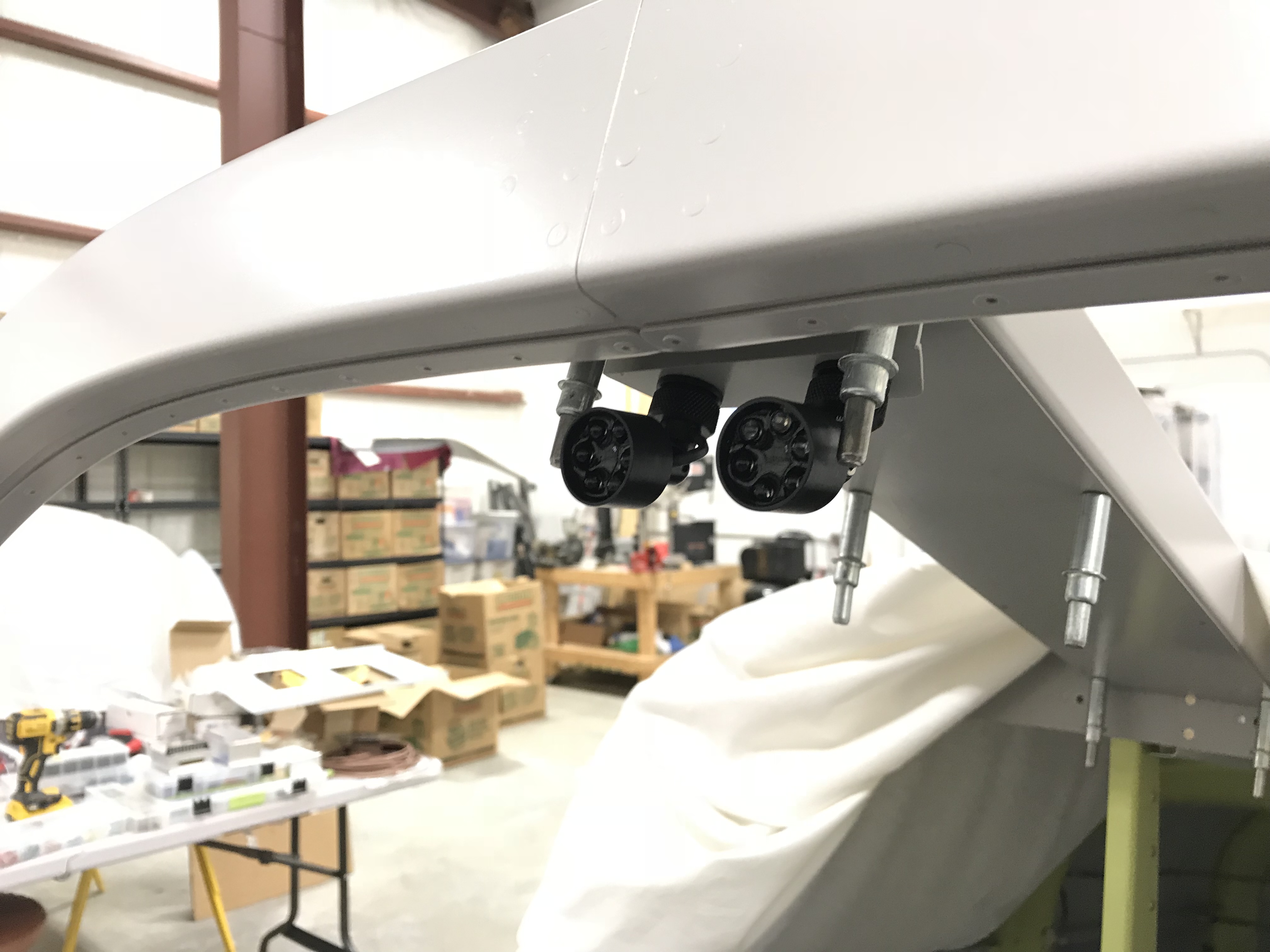 These lights are extremely well-made by my friend and fellow RV builder Rich Mileika. In addition to Oplite, Rich owns and operates Machine, Inc, a precision machining company in the greater Boston area. If you need quality cockpit lighting, try Oplite…you’ll like ’em.

And lastly, I replaced the stock Van’s flap motor with an upgraded version made by Pat Hatch at PH Aviation Services. 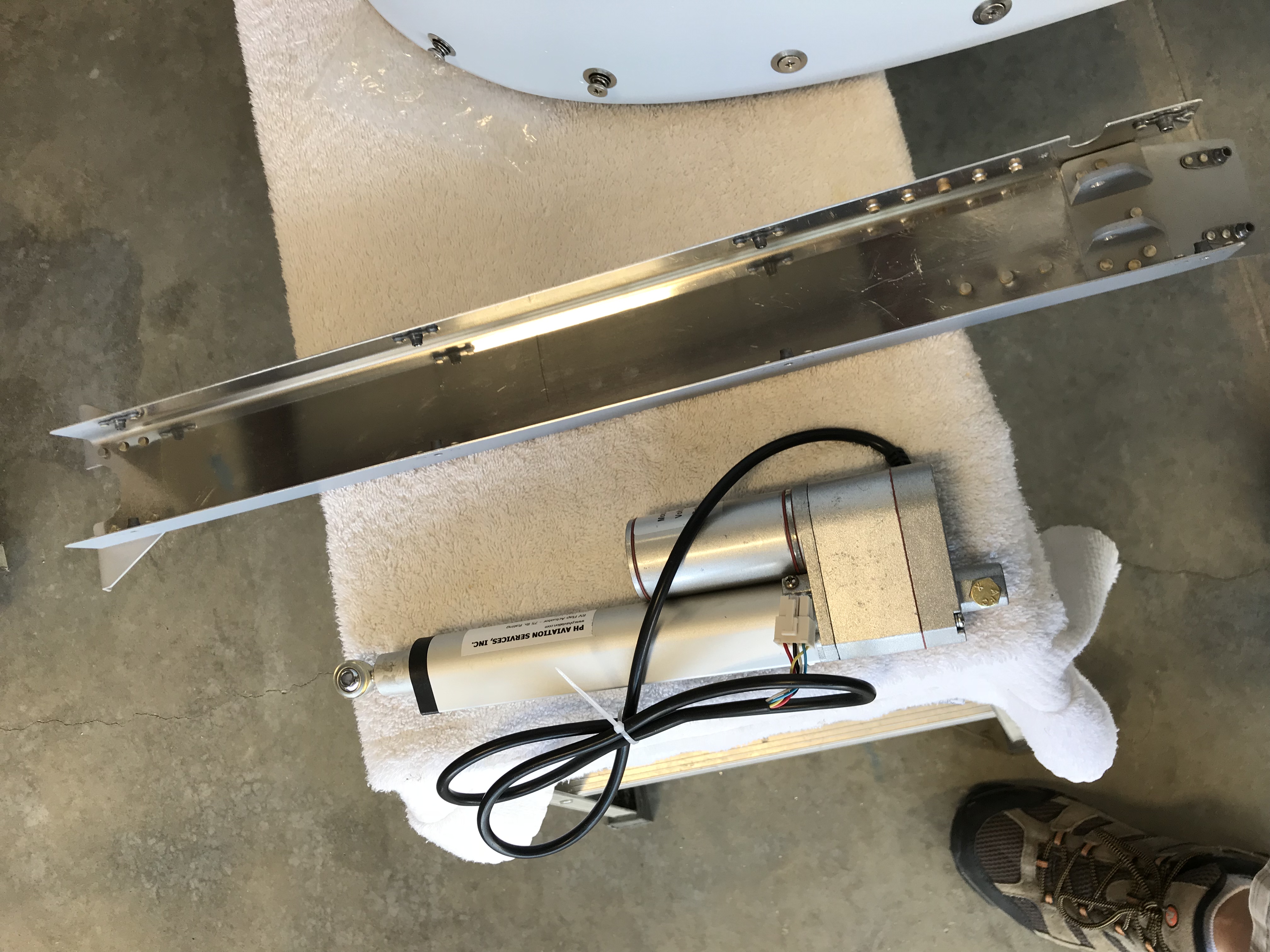 This motor has several advantages over the stock unit. The motor and jackscrew are separate so grease can’t migrate into the motor windings, a common problem with the Vans motor. It also has limit switches to stop the motor at full extension on either end, and also has a position sensor to report flap position to whatever device needs it.

The only downside is that the flap support bracket must be modified to accommodate the new motor. Rather than trying to rework the existing bracket, I bought new parts from Vans and started from scratch…only took a couple of hours, and Pat’s motor will save some wiring work later on. 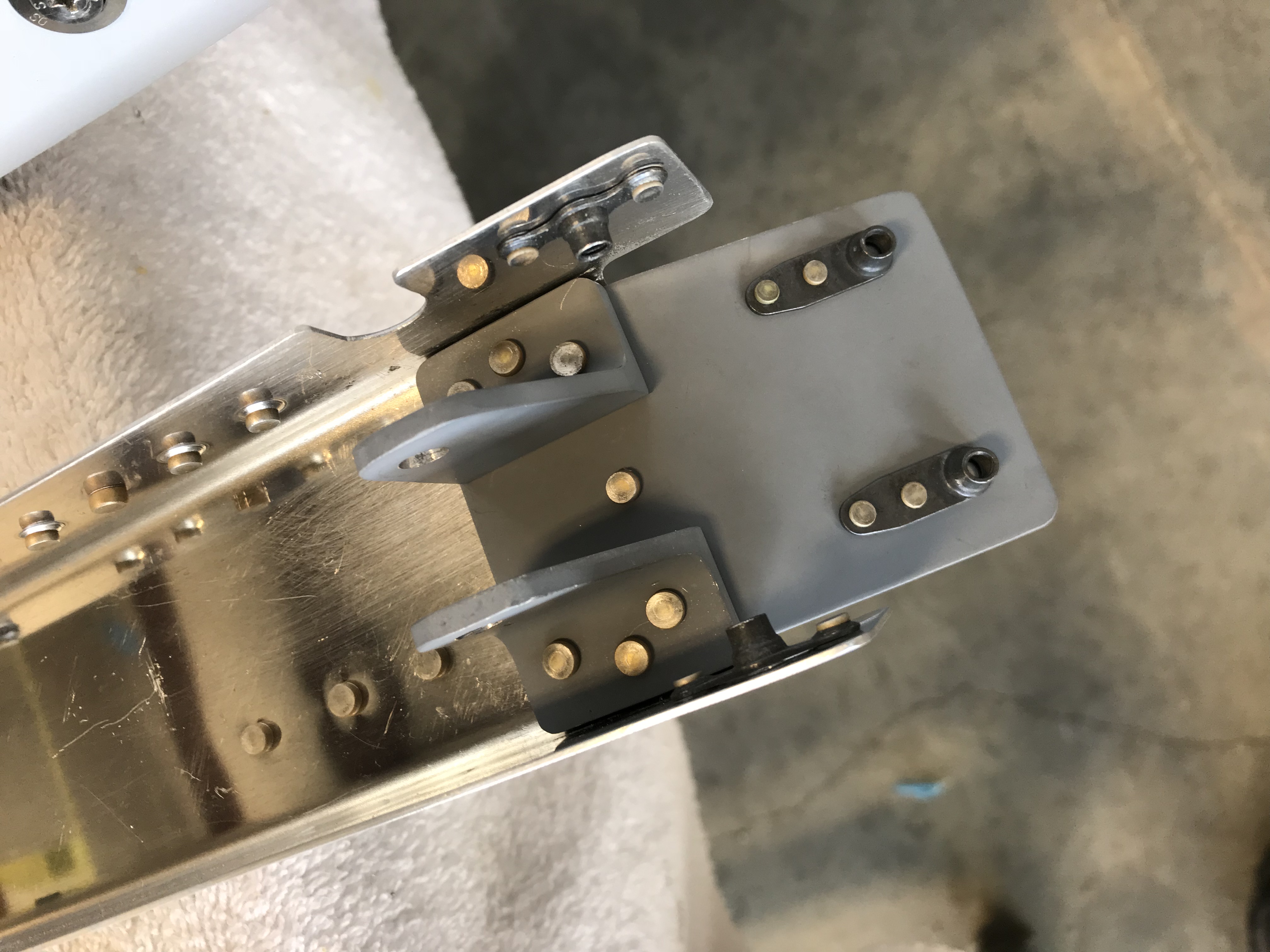 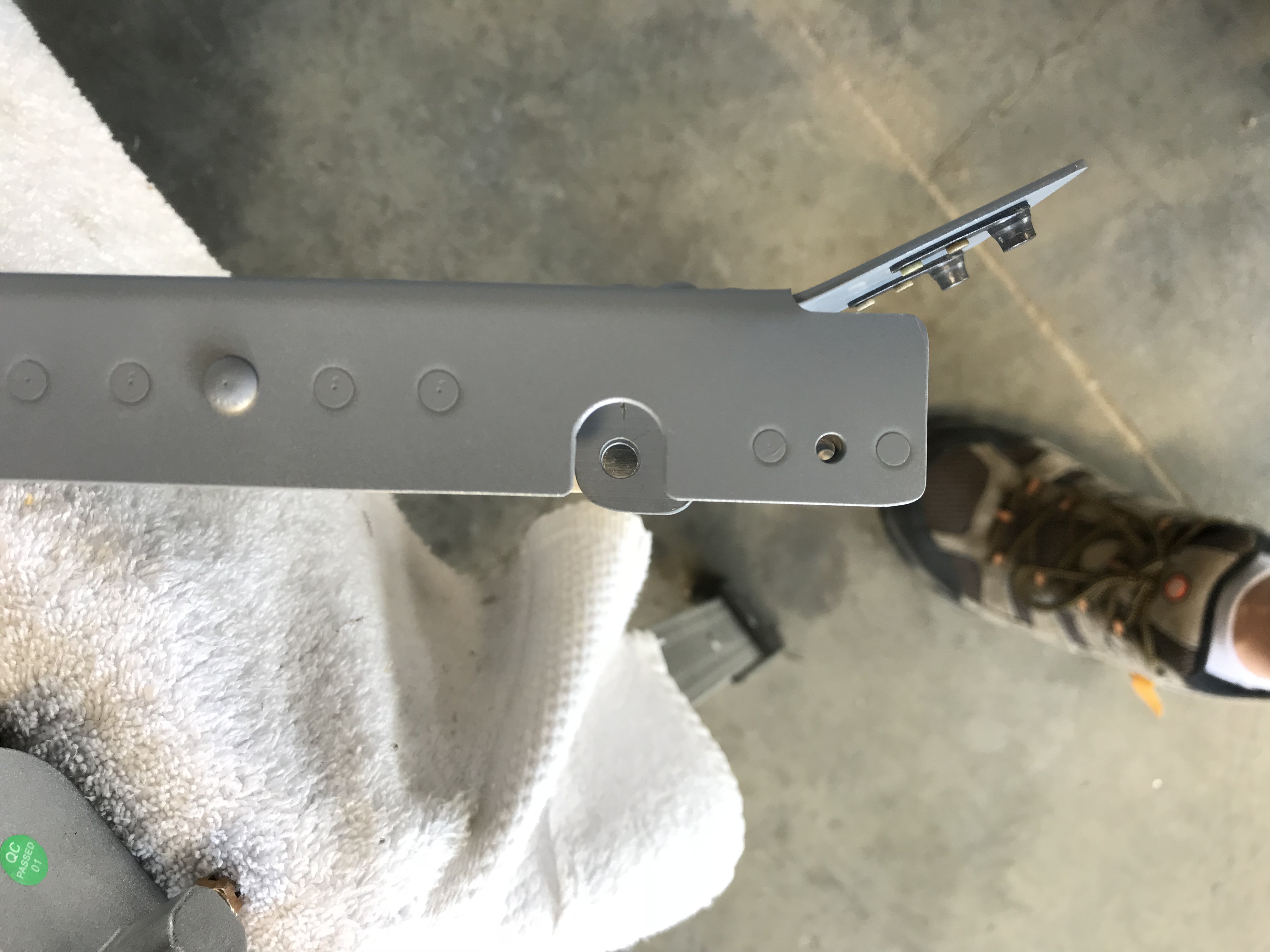 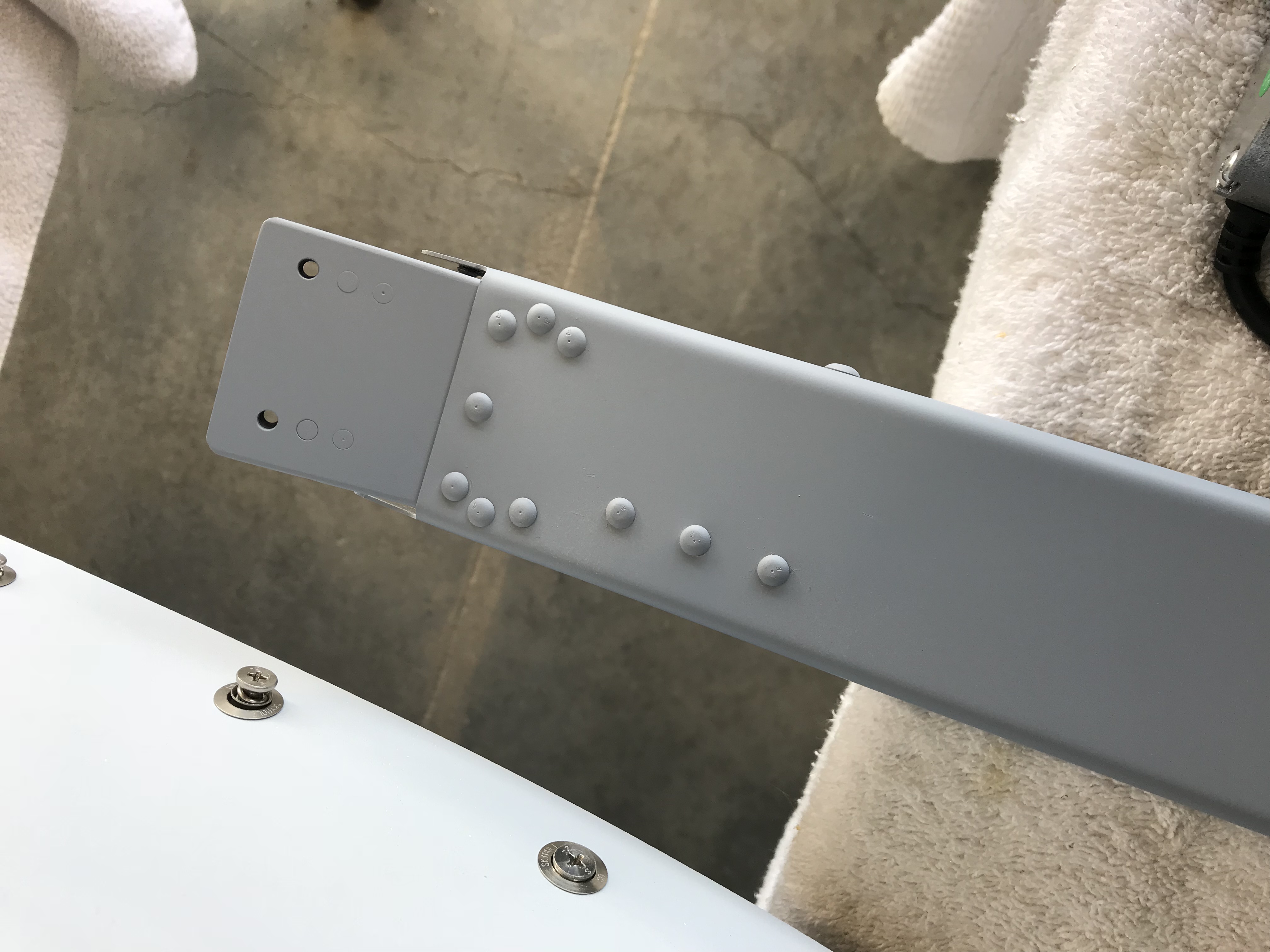 Got the flaps rigged and the electric motor connected…time for some fun! Click on the video below to see.

The last major task I had to take care of with the wings installed was rigging the flaps. To do that, I temporarily installed the flap motor and flap actuator arm. 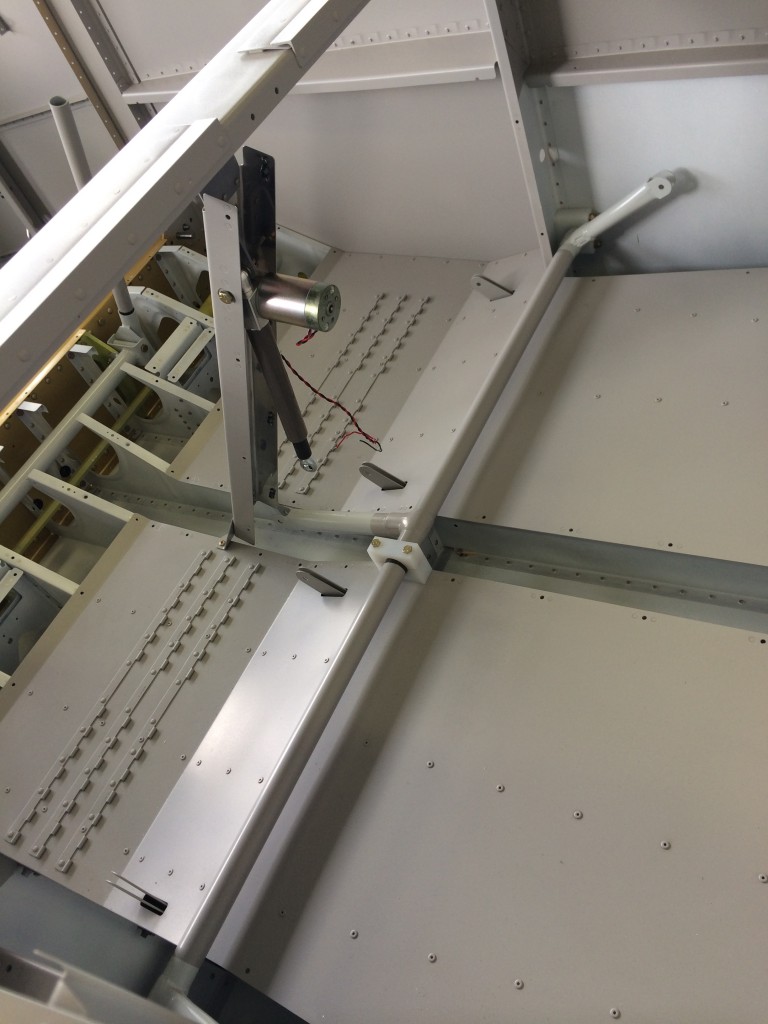 I installed the flaps, and found that the left flap rubbed against the fuselage side skin. The areas outlined in blue are where I had to file off some of the flap skin to eliminate the interference. 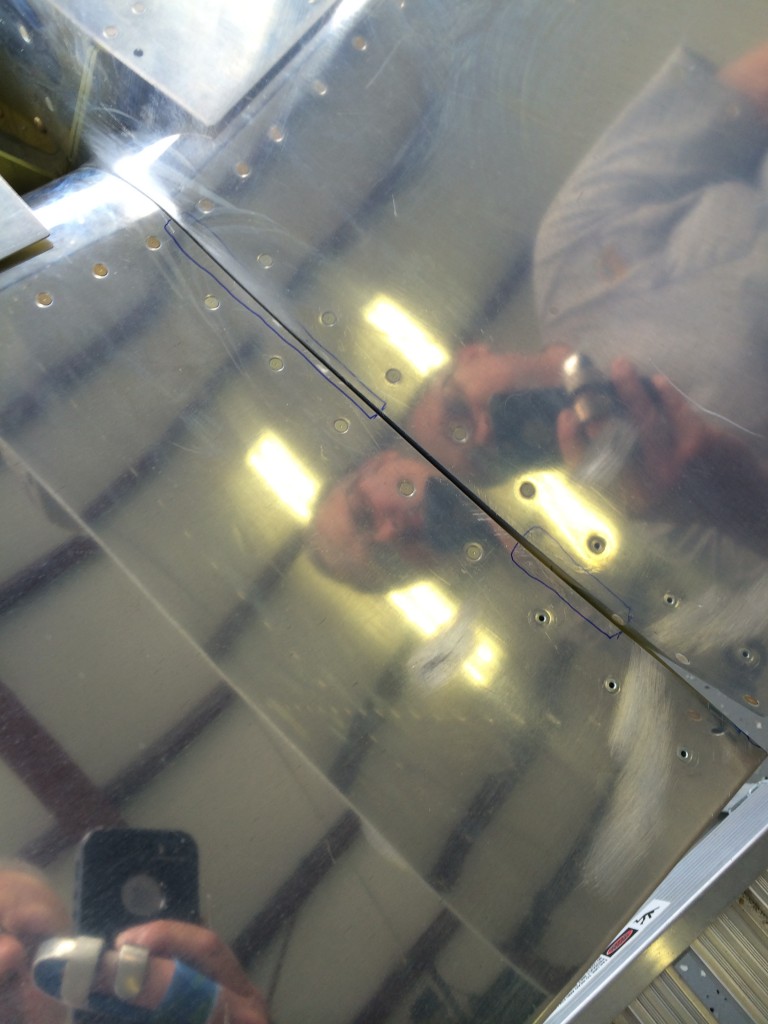 The most tricky part was figuring out exactly how much to enlarge the fuselage side skin openings to accommodate the movement of the flap actuator arms as they move the flaps up and down. Here’s my first guess with some rough measurements roughed out from a friend’s RV-7. 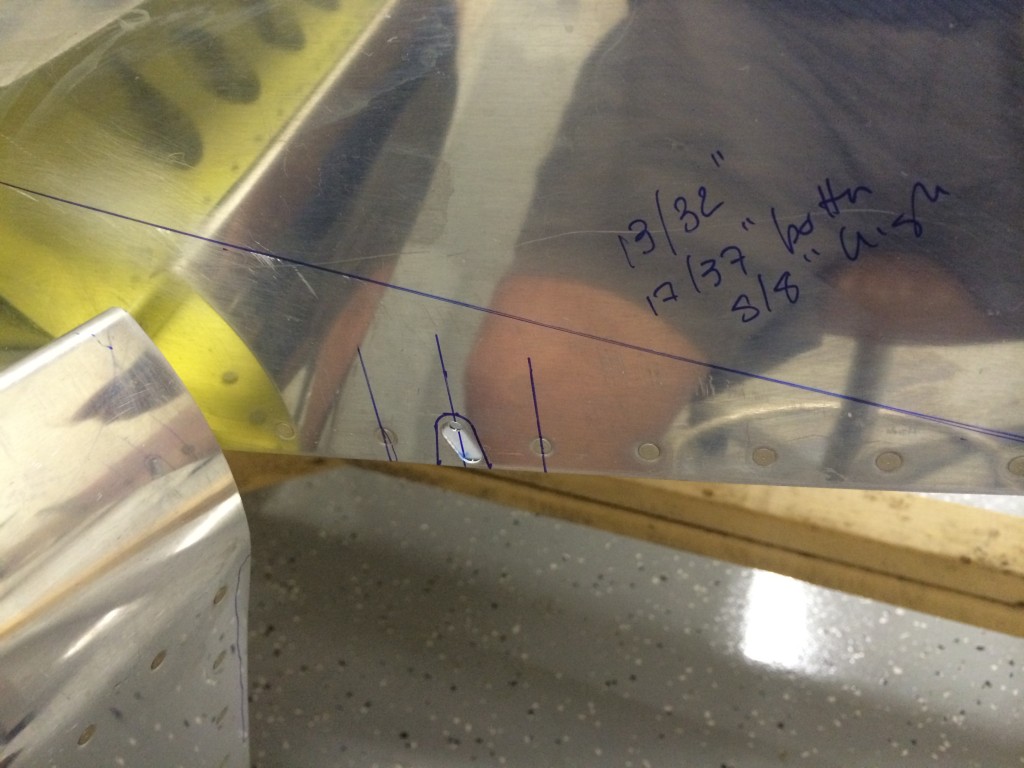 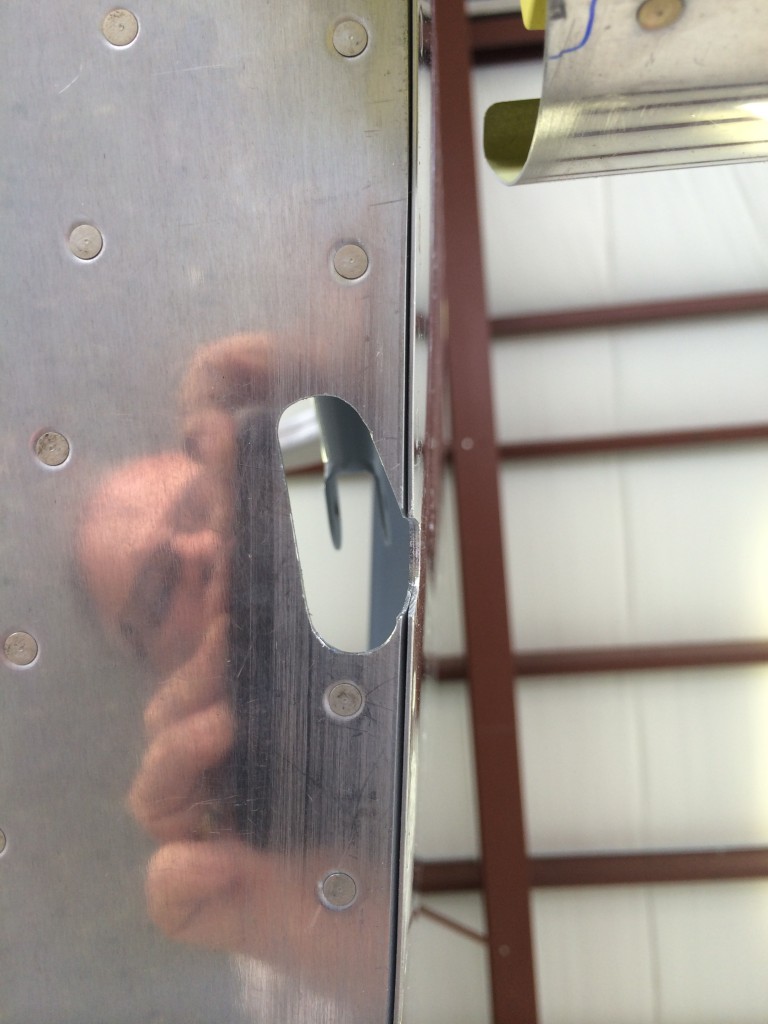 This was a very iterative process…move the flaps, check for interference, and trim the holes as appropriate.  It took several hours to get the holes for both actuator arms to move freely. 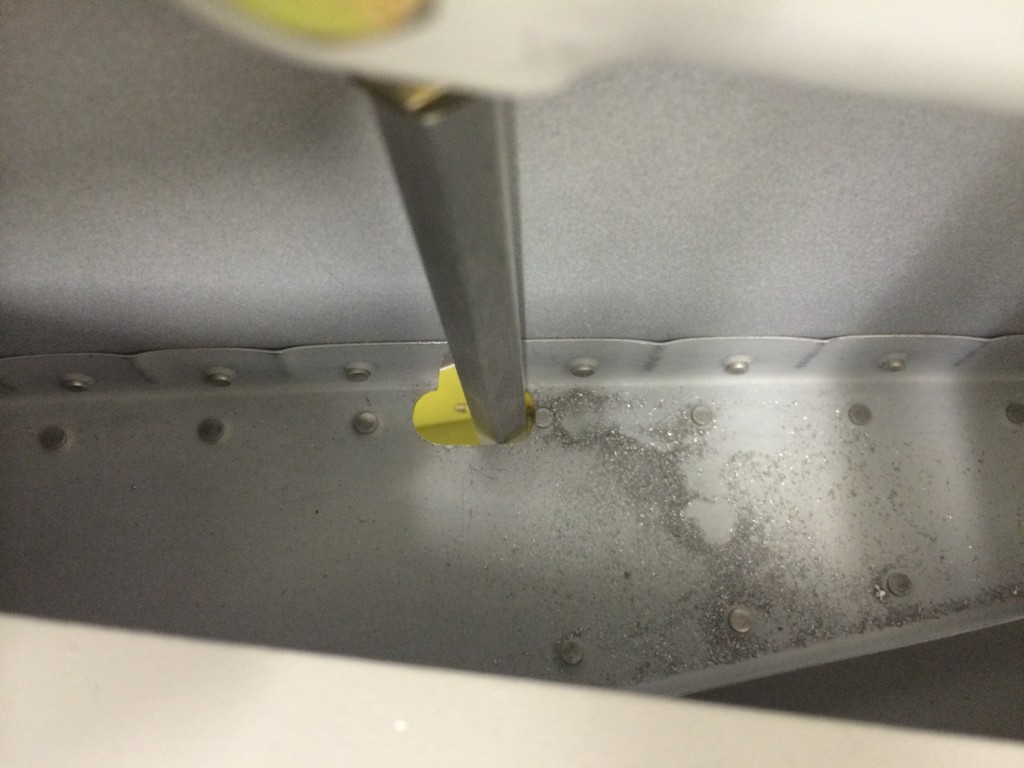 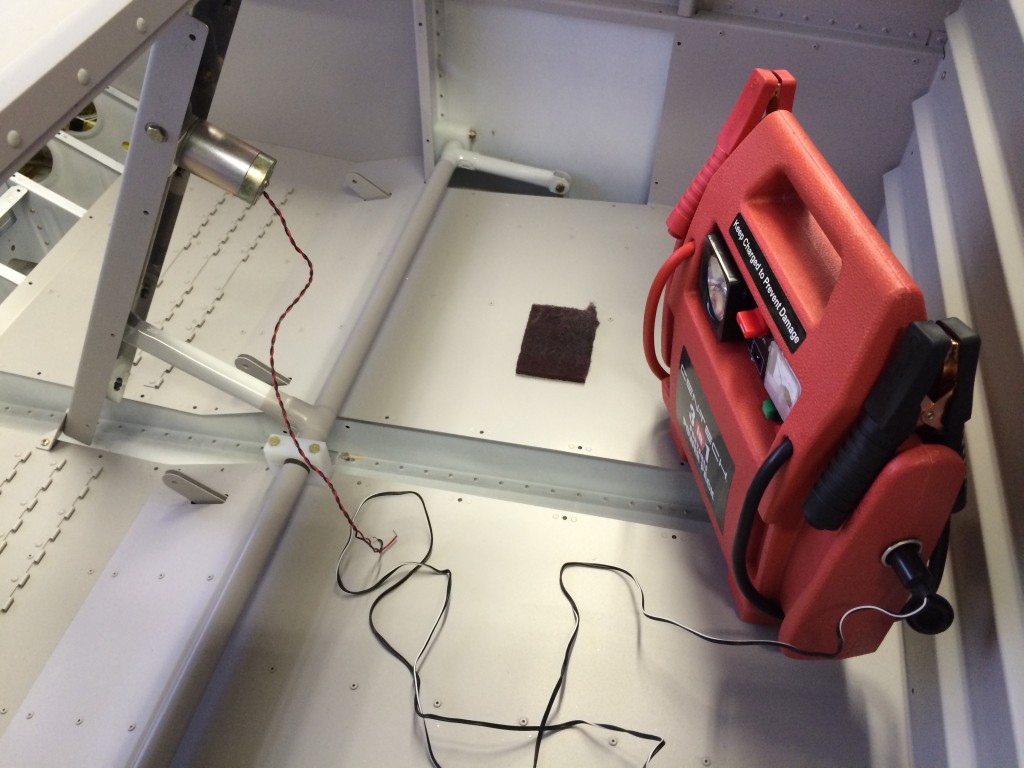 As I was checking the holes for interference, I was also checking for the proper range of flap motion. Vans says the flaps should go down no more than 45 degrees, so used my digital level to measure the flap angle both at full up and full down – subtracting full up from full down shows slightly less than 45 degrees on both sides – perfect! 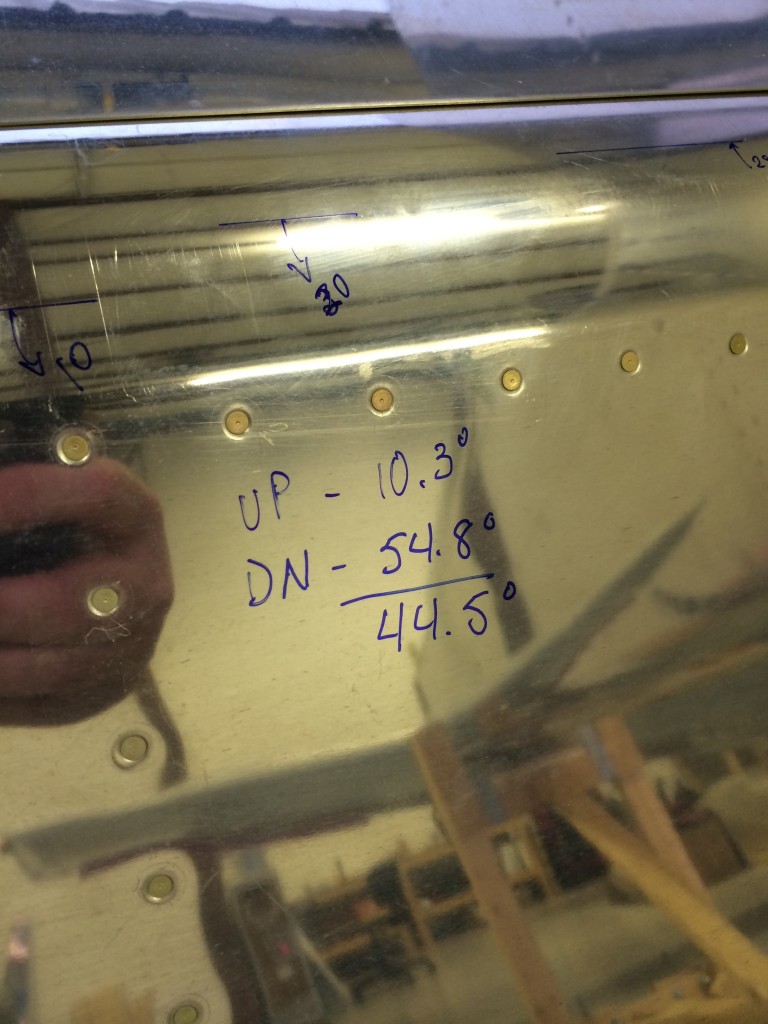 And here’s the end result on the right flap…looks great! 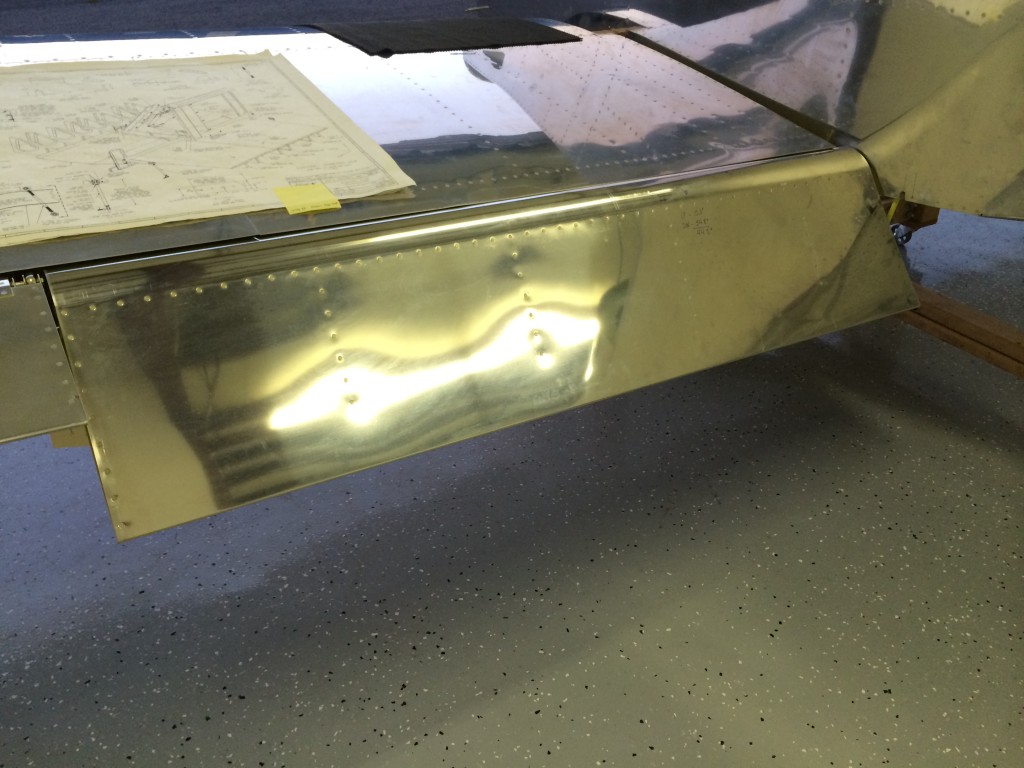 Food can be effective bribe. Last weekend I bribed Ellen and Whitney, and RV-7 friends Andy Olech and Allison Bailey, with lunch at the Midfield Cafe to help install the wings for the first time. Thanks Andy and Allison, we appreciate you flying up from Hartford and spending the day with us!

And as always, thanks to my family – Ellen and Whits, I couldn’t do any of this without you ! 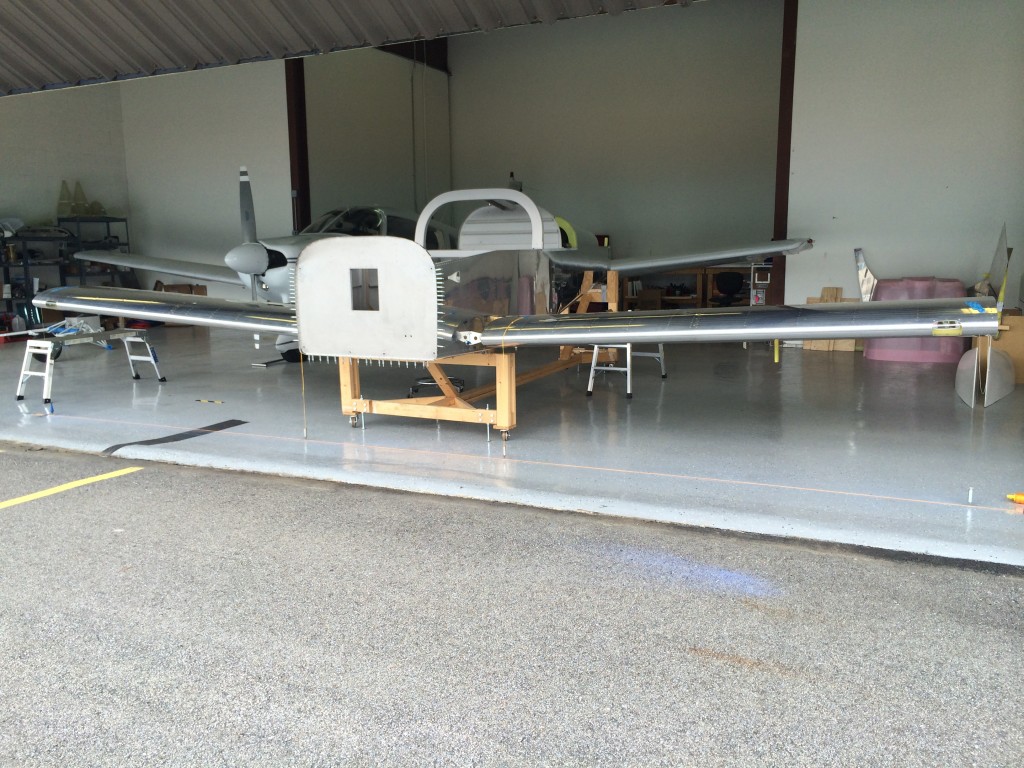 This is one of those times in the project when a lot of past effort to maintain tight tolerances really pays off. Every RV slow-builder stresses about making sure the front and rear spar bulkhead halves in the fuselage are spaced 1.438″ apart as required by the plans. With the help of a little Boelube, the spar ends slid right into the fuselage.  Cool.

With Andy, Allison, Ellen and Whitney adjusting wing position, I inserted a couple of taper pins into bolt holes for each wing. Van’s calls for four pins, so before I made any final measurements and drilled any holes, I borrowed some long, custom-made stainless steel taper pins to augment the four pins I made from hardware-store bolts. 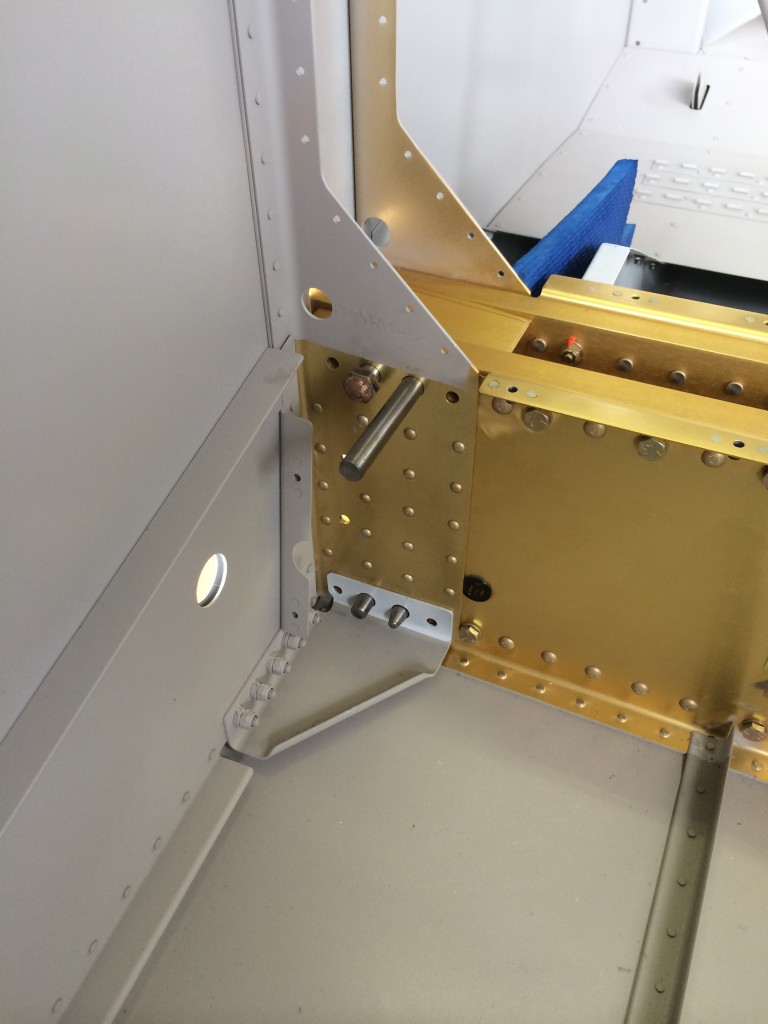 Thanks to Rich Mileika for making those really nice stainless steel taper pins, to John Sannizzaro and Bill Higgins for flying up to Nashua yesterday and helping me get the last 3-4 taper pins in so that the wings are secure, and last but certainly not least, thanks to Bob Weldon and his daughter Emma for muscle power and precision plumb bob stabilization <g>.

With the wings temporarily installed, I made sure the fuselage was level laterally and longitudinally. The plans call for measuring longitudinal level on the longerons at the cockpit, but these almost always have some residual twist from the bending process that makes it hard to get a good level measurement. 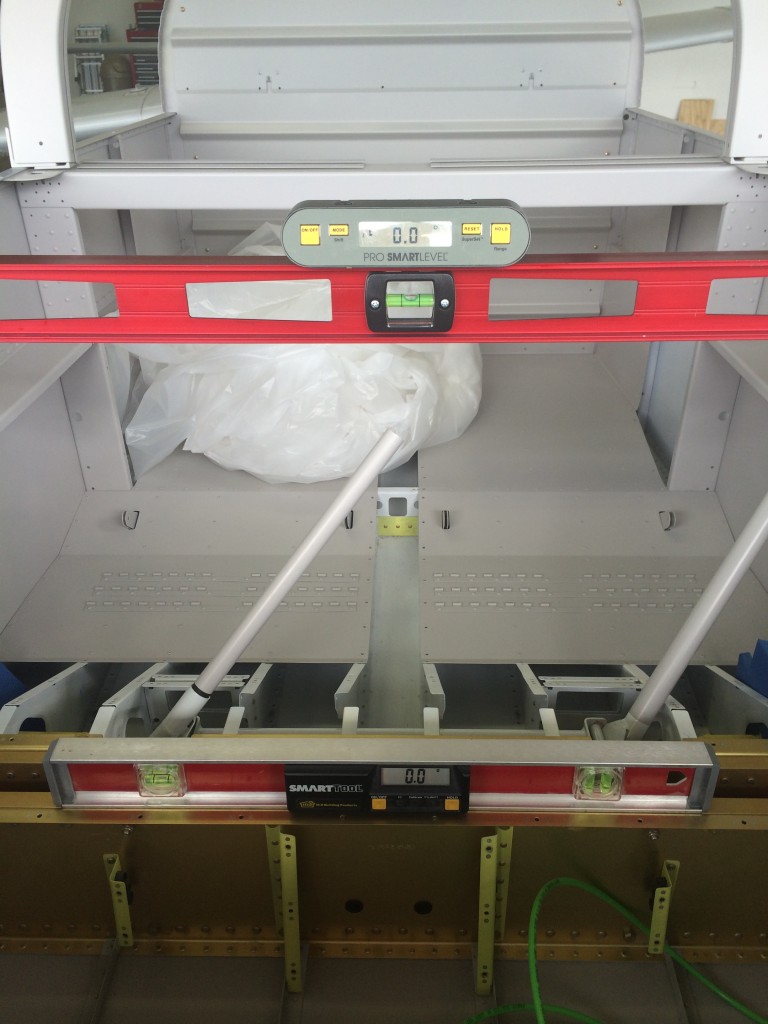 So, I just moved the levels back a few feet to a straight portion of the longerons.  I had to adjust the cradle a little to get everything spot on, no big deal. 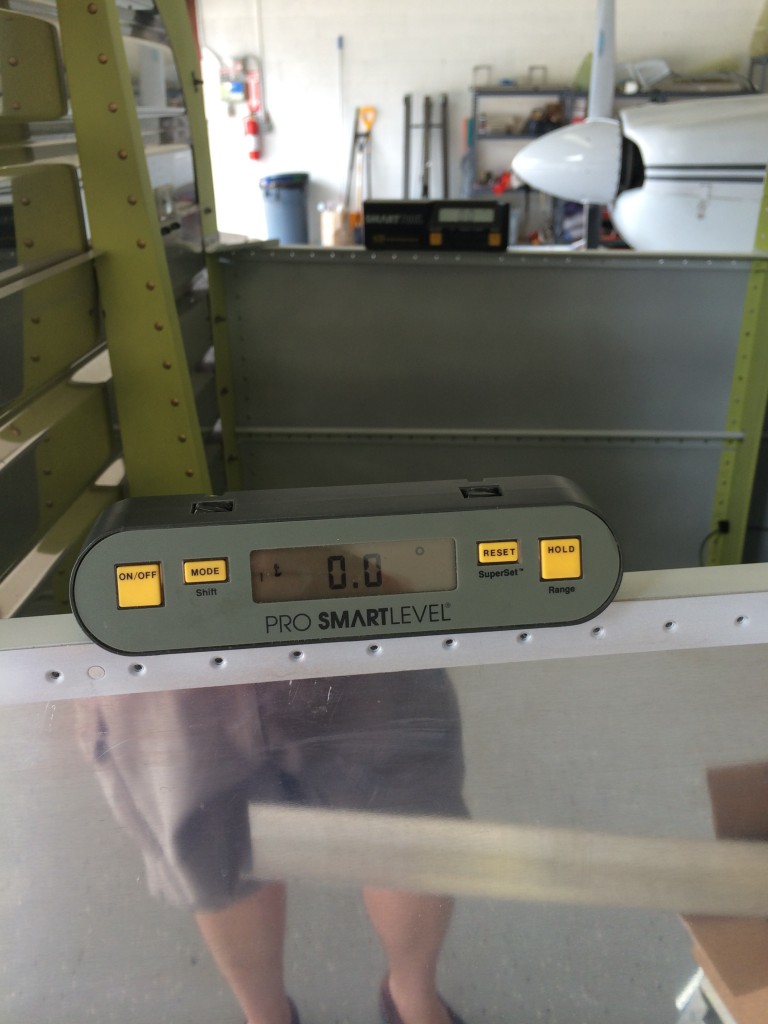 According to the Van’s FAQ on wing incidence and sweep, the next measurement is from reference points on each wingtip to a common point on the aft fuselage.  My measurements were the same to within 1/32″…cool again. 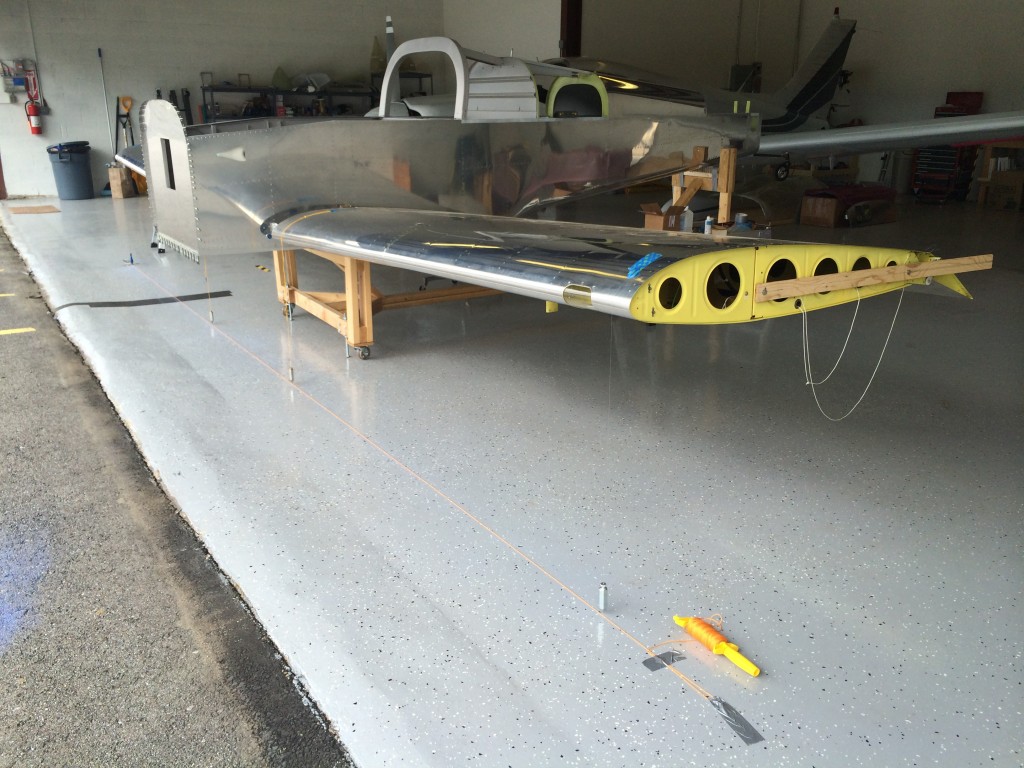 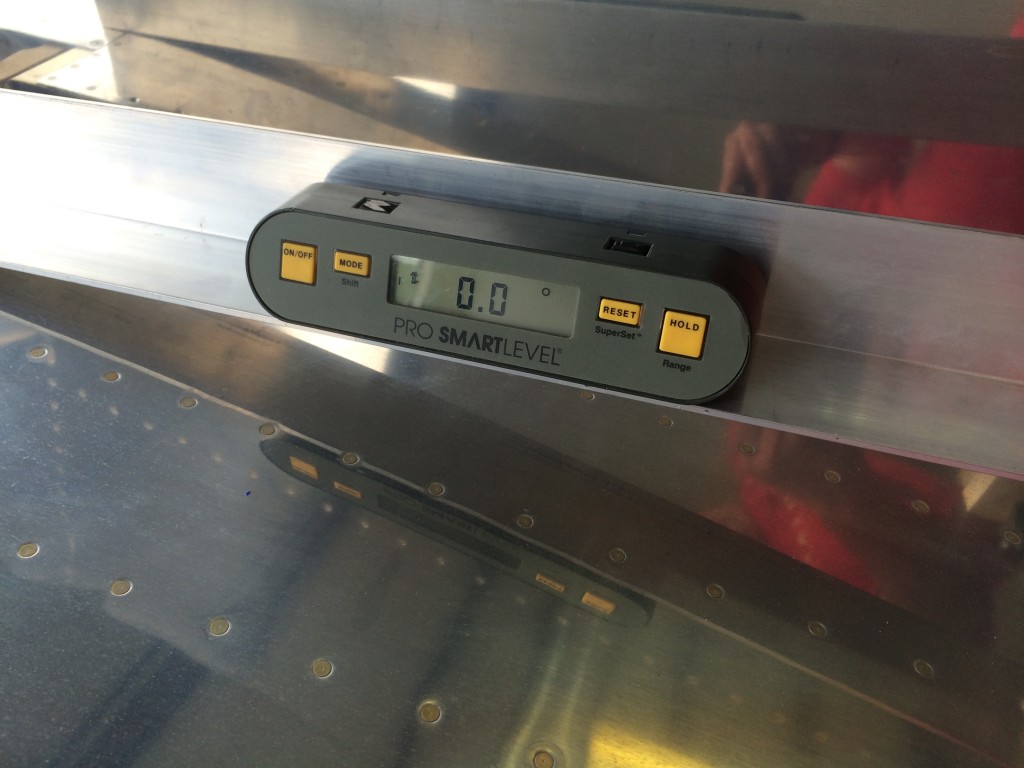 The pic above shows the left wing incidence is right on the money. The right wing was the same. 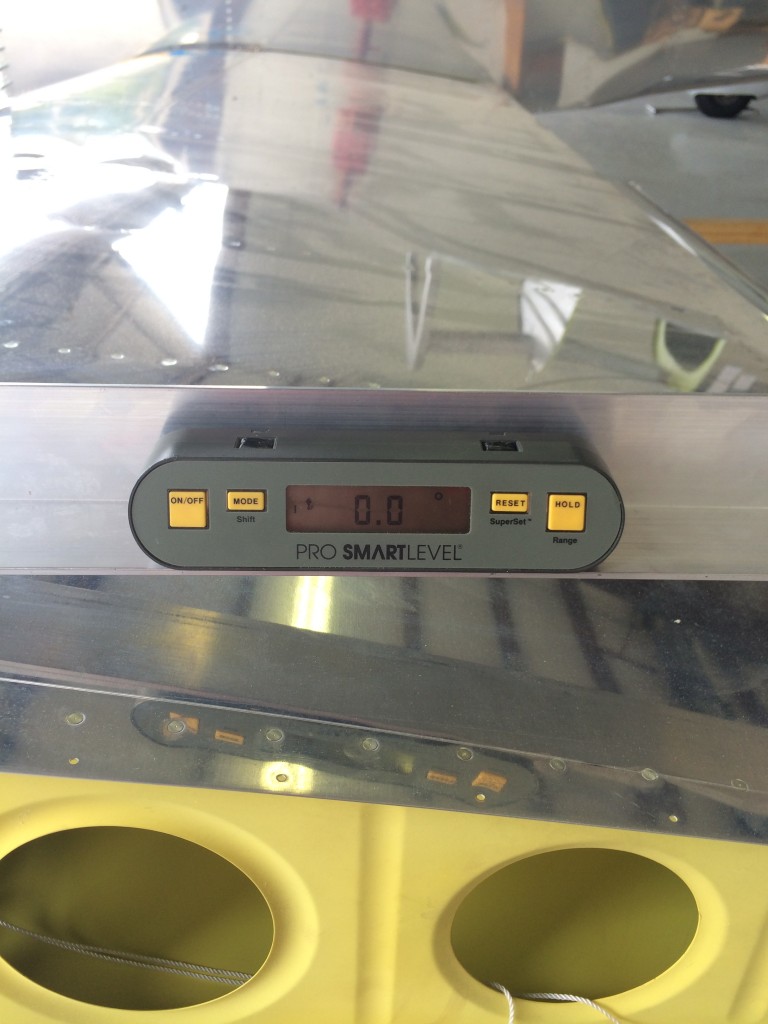 Just for a goof, I checked the angle of incidence at each wingtip…every measurement was within 0.1 degree. This is a real tribute to the quality of Van’s prepunched kits; with reasonable effort, it’s possible to build a nice, straight airplane. 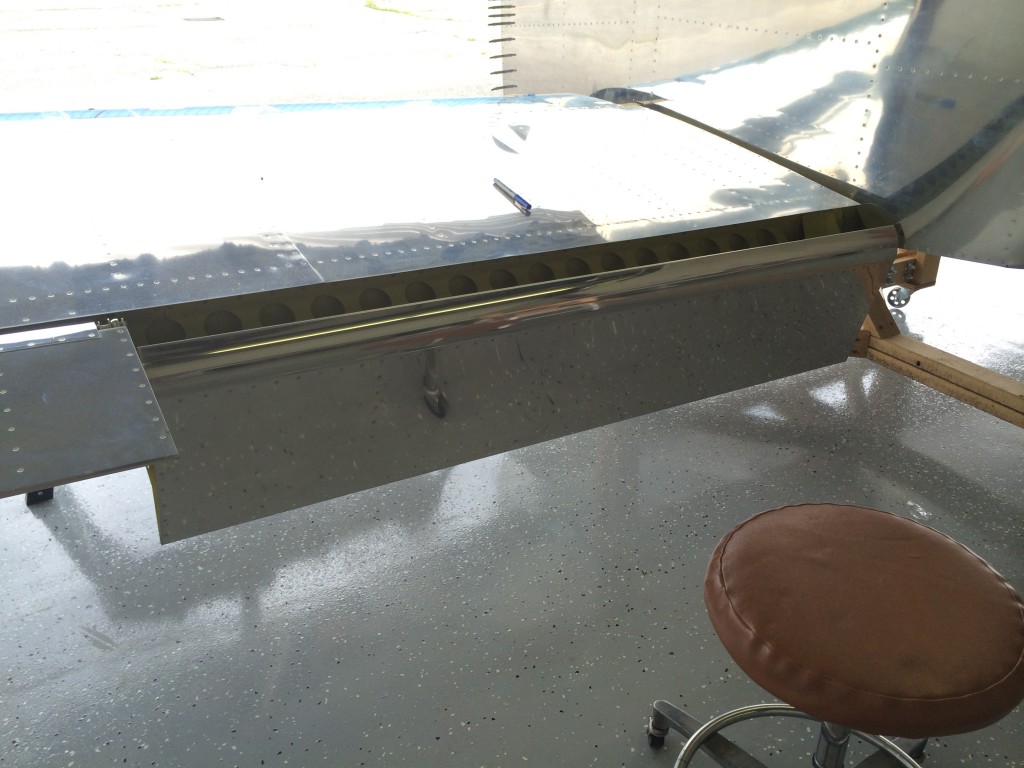 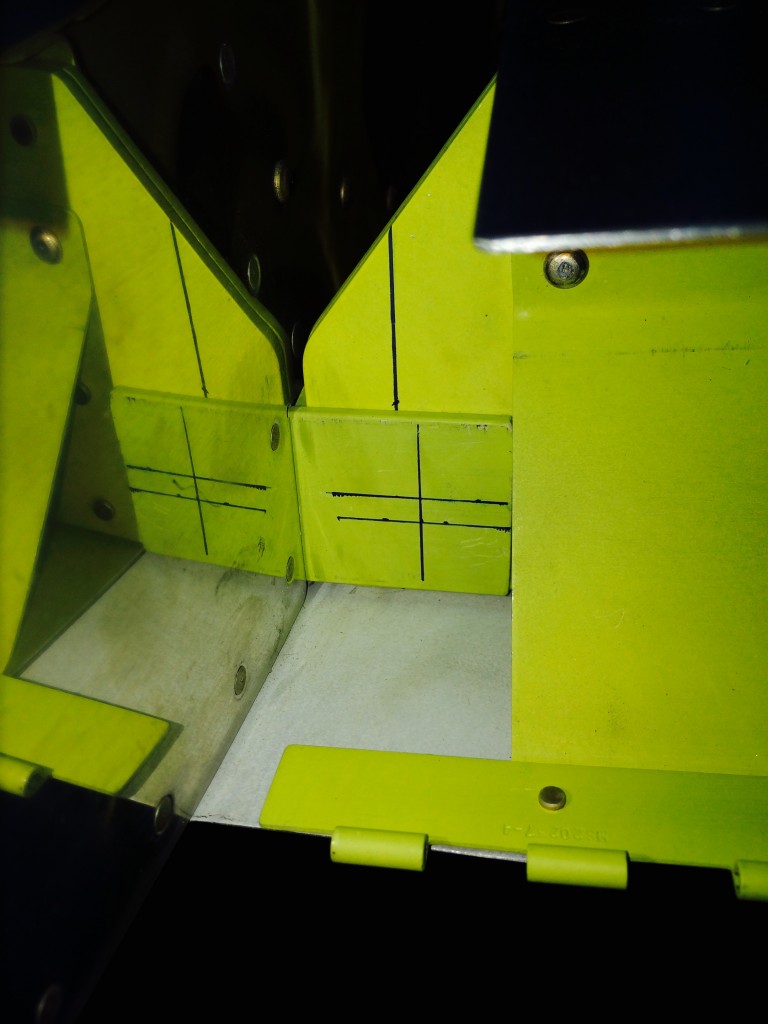 …and so does the left wing. 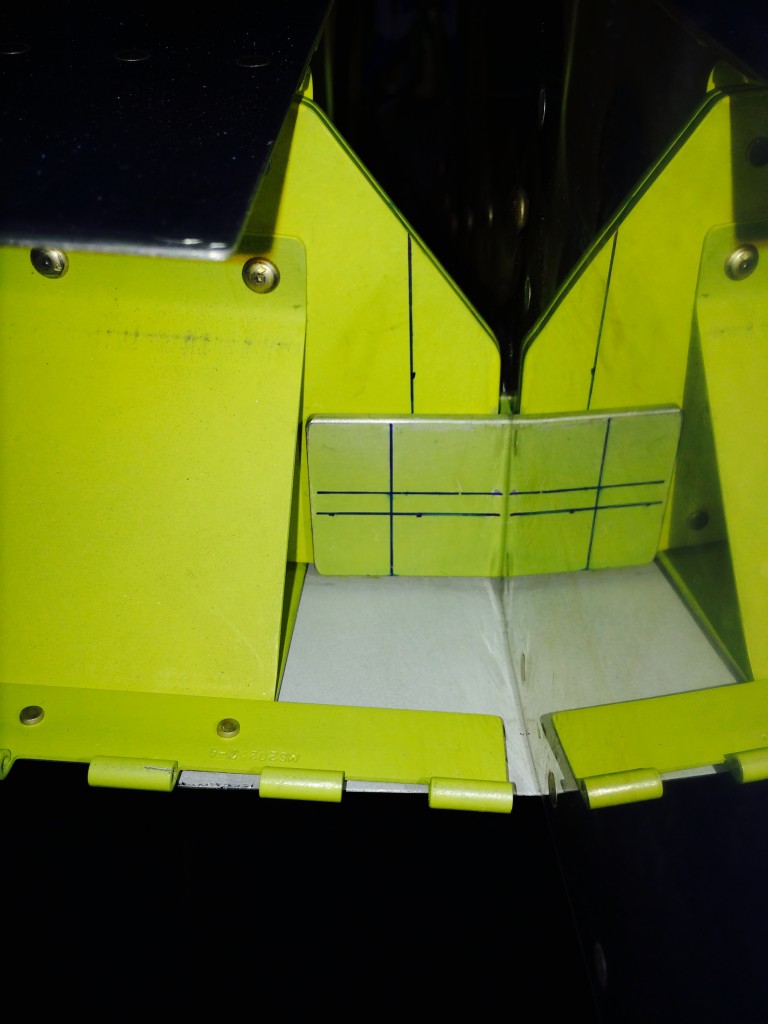 I’m not in a rush to drill these holes. They’re one of the few gotta-do-it-right-the-first-time things on the project, and I plan to sneak up on them one step at a time.

In another fit of marathon airplane building over the last three days, I finished the right flap. Did it just like the left one, so I’m not gonna waste your bandwidth with more pictures.

One not-quite-cool note, this flap came out with 1/16″ twist. I’m not quite sure how that happened, because I rechecked the jig before starting. But there it is and from some research I found out it’s not uncommon, so I’m not gonna stress over it.

With that, I’m declaring the flaps complete…for now.

Did some marathon airplane building over the last three days, and Ellen and I managed to complete the left flap. First, I pulled the bottom skin off and riveted the ribs to it, bucking bar access is a lot better without the upper skin in place!

Next, I reassembled the flap without the spar. Ellen and I riveted the upper skin-to-rib and bottom skin overlap rivets. Access was tight, but the tungsten bucking bar made riveting relatively easy.

Ellen did the shooting, I bucked…

The next day I reinstalled the spar and pop-riveted the rib leading edge tabs. Nothing too tricky here, just need to gently push aside the flap leading egde to get the pop riveter in place. I used my cheapo riveter which I ground down to fit in tight spaces, worked fine.

After that, I solo-shot the upper skin-to-spar rivets and squeezed the rib-to-skin rivets – came out great!

Before squeezing the spar/skin/hinge rivets, I removed one eye from the center of each hinge. This is where the flap hinge pins will be inserted; I liked this idea better than drilling a hole in the inboard aileron bracket to facilitate inserting the hinge pin.

Squeezing the spar/skin/hinge rivets was easy, just had to make sure the squeezer set was narrow enough to make the shop head without hitting the hinge eye.

The only remaining task was to squeeze the rivets that secure the flap brace angles. Easy-peasy…

Don’t know why I didn’t get a shot of the completed left flap…but it looks just like the right one – so keep reading. One more thing… this flap came out with zero twist. Very cool!

Just as soon as the parts had dried, I riveted the flap actuator reinforcement plates to their respective inboard ribs – making sure to get the nutplate in there too. One note here – make sure you squeeze the aft nutplate rivet before you put the reinforcement plate on, otherwise that rivet will be difficult to get with a normal squeezer yoke. The sharp-eyed builders among you will also notice that I used AN470 rivets here; Vans calls out flush rivets but I didn’t want to countersink the rib – it’s not really thick enough. I had the 470-3s, so I used ’em.

The next day I riveted the rear tabs on each flap rib to their respective skins, and clecoed the flaps together for final assembly. I’m not going to cover assembly of each flap, they pretty much go together the same way. Big thanks to Dave Rogers for letting me use his flap assembly V-jigs. I screwed ’em to my worktable and leveled them to each other – no problems.

One gotcha…after spending all that time in Antony’s paint booth, I realized that I forgot to prime the faying surfaces (i.e., skin overlap areas) on the flap bottoms. Since this is an area where moisture can get forced in between skins, I did some quick masking/alodining/priming of those areas and fixed the problem.

Got a lot of work done on the flaps this weekend. Friday was a day off for me, so I spent the afternoon prepping and alodining small flap and aileron parts – ribs, stiffeners, brackets and spacers.

It was too cold to spray and scrub the larger flap and aileron parts outside, so early the next morning I hauled those parts over to the Hanscom Aero Club hangar and did all the cleaning, scrubbing and alumi prepping there – nobody minds a wet floor as long as you clean up after yourself. With that done, I packed up everything including primer, spray gun and miscellaneous supplies and headed up to Maine where my friend Antony Parchment, RV-7 builder and all-around great guy, allowed me to use his paint booth to get all those parts primed.

Antony’s paint booth is wicked great – it’s collapsible and folds against one wall when he’s not using it. I helped him assemble it and got right to work priming. Here’s the booth…sorry for the crappy pictures, I did ’em with my cell phone.

And here’s the flap/aileron priming in progress.

Meanwhile, Antony worked on fitting steps to his RV-7 fuselage.

After a hard day’s work, we hunkered down on some great Japanese food in Portland with Antony’s wife and a neighborhood friend. I packed everything up and motored back to Boston. A hard 15-hour RV workday, but worth it. Mission accomplished!

Still nothing to report, except the reason now is that I just got back from a two-week work trip to Huntsville, Alabama.